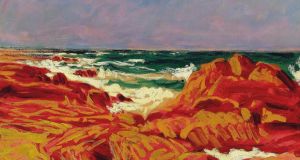 The National Asset Management Agency (Nama) has slashed the prices of paintings handed over by “Celtic Tiger” financier Derek Quinlan in a second attempt to sell them at auction in London.

Two years ago, Nama offered Mr Quinlan’s art collection for sale at Christie’s auctioneers and raised just over €2 million. But some of the paintings failed to sell.

Now, Christie’s has announced that four of the unsold paintings will go under the hammer again on November 21st in London. The estimates have been cut by an average of 50 per cent.

Although the international art market is booming, Irish art prices have fallen sharply since the end of the economic boom.

The estimates for le Brocquy represent a dramatic drop in value for the artist’s work. It is believed that Mr Quinlan paid £150,000 to a London art dealer for Tinker Breaks Whitethorn in 2006. Nama originally took 16 paintings from Mr Quinlan. Two went to the National Gallery of Ireland – Sir John Lavery’s Return From Market which the agency valued at €300,000 and “gifted” to the nation; and, National Airs/Patriotic Airs by Jack B Yeats for which the gallery paid Nama €175,000.

The other 14 were consigned to Christie’s for auction in London and New York. To date, nine have been sold; the present four will go under the hammer for a second time on November 21st in London; and the fate of one unsold picture in New York has yet to be decided.

Mr Quinlan, a former employee of the Revenue Commissioners, was one of the best-known figures of Ireland’s boom. He created a huge property investment business.

Mr Quinlan left his Shrewsbury Road, Ballsbridge mansion in 2009 and relocated to Switzerland owing hundreds of millions of euro to the banks. He has been living in London since 2010.