What next: When will abortion legislation be passed? 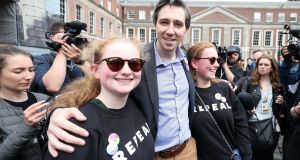 Minister for Health Simon Harris arrives at Dublin Castle ahead of the final announcement of the result in the referendum on the 8th Amendment. Photograph: PA

The country is set to repeal the Eighth Amendment of the Constitution by an overwhelming majority.

Initial results and tallies from across the State indicate the country has voted in favour of removing Article 40.3.3 of the Constitution and for provision to be made for the regulation of the termination of pregnancy.

But what happens next?

The Government will shortly bring forward proposed legislation to the Dáil, but until this is passed the current law, the Protection of Life During Pregnancy Act, remains in place.

The Government’s proposed legislation will make terminations accessible within the first 12 weeks of pregnancy.

There will be a three-day waiting period enforced from the time a woman seeks an abortion from a medical practitioner.

After this 12-week period, if there is a risk to a woman’s life or a risk of serious harm to the health of the mother, two doctors will be asked to determine if an abortion should be permitted.

However, terminations in these instances will not be carried out beyond viability, which is reached at 24 weeks of pregnancy.

Abortions will also be available if the woman is informed the foetus will not survive outside the womb, or will die shortly after due to a fatal foetal abnormality.

You can find more detail on this proposal here.

How long will it take?

Taoiseach Leo Varadkar said on Saturday that he hoped to have the proposed legislation passed within six months.

“The fact that the result is so clear that it is more than 2:1 in favour, will make it much easier to get the legislation through the Dáil,” Mr Varadkar said.

Minister for Health Simon Harris said the legislation will be drafted over the summer if Cabinet gives approval on Tuesday.

“I hope we would be in a position to introduce legislation in the Oireachtas in early autumn,” Mr Harris said.

Tánaiste Simon Coveney has expressed confidence that TDs previously opposed to repealing the Eighth Amendment will not seek to frustrate the passage of legislation in the Dáil, following an emphatic vote by the Irish people in favour of repeal.

“I think what you will see now is the Government moving quickly on the legislation and the Opposition will support that too. I think there will be very few people in the Dáil who will try to frustrate what is now the clear will of the vast, vast majority of the Irish people,” he said.