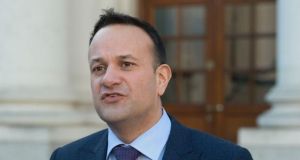 Another part of Taoiseach Leo Varadkar’s message had not been heard in such plain terms before.

Taoiseach Leo Varadkar laid down a clear marker on the limits of borrowing when he spoke to the Dáil on Thursday morning. In doing so he was sending a clear message about the task facing the next government.

One part of Varadkar’s speech – which was flagged by the Taoiseach’s office in advance as significant – was entirely familiar: the commitment to borrow many billions of euros in the short term to meet the costs of the crisis and to stimulate economic recovery when businesses can reopen and commercial life restarts. With the budget deficit – the difference between incomings and outgoings in the government’s accounts this year – on track for something of the order of €30 billion, it is clear that is a strategy that the Government has taken to with some gusto. This borrowing for day-to-day requirements and economic stimulation is unprecedented by any Irish government, ever.

But there was another part to Varadkar’s message which had not been heard in such plain terms before, and marked a clear change in tone from his pronouncements on the subject of late.

What Varadkar is trying to signal is that the next government – and to this extent, his intended audience may well have been the Green Party and Fianna Fáil – will need to have a deficit reduction plan. It is understood that there have been several conversations at the highest level of government about this in recent days, and Paschal Donohoe, the Minister for Finance, has been making similar signs in recent weeks. But this is the first time Varadkar has ventured into this territory in such blunt terms.

He does not mean that the next government will need to cut the vast amounts of borrowing slated for this year; everyone agrees that is both necessary and wise. What he is saying is that Ireland cannot rely on unlimited market finance forever. And further, even if it could finance another €30 billion deficit next year, either on the bond market or through EU mechanisms, it would not be prudent to do so because that debt must be serviced and ultimately repaid and refinanced.

It is unclear yet if the next programme for government – assuming one is agreed and it is not derailed by the Greens’ leadership challenge – will contain a deficit reduction target or plan. But whether it’s written down in that document or not, the next government will need one in practice.

“There are no easy answers,” Varadkar said. “There are no risk free or perfect solutions. No polices that produce only winners. So, the next Government will have to sail the ship of state through the hardest of rocks and the toughest of hard places,” he concluded. It was intended to be a sobering message.