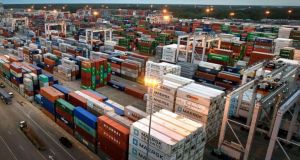 From January 1st smugglers could avail of a 5 per cent profit margin on copper alloy tubes from China if they can order them into Britain and then move them through the North into the Republic.

Britain has released a paper laying out its vision for what trade across the Irish Sea will look like from January but it has several major holes.

It lays out how London intends to implement last year’s agreement that the North will have special arrangements in order to avoid the need for checks on the border with the Republic.

The “position paper” accepts this means there will be checks on goods going into Northern Ireland from Britain – something the UK government had previously denied – albeit while minimising their significance. But it leaves these key questions unanswered:

Where will the checks be?

Under the agreement, Britain is in the strange position of having the responsibility of enforcing the edge of the EU’s single market. To do this, the UK government paper says “no new infrastructure” will be required.

However, according to British sources, this does not exclude the expansion of existing facilities at Belfast Airport, Belfast Port, and Warrenpoint. Moreover, extra inspections may be added to the current checks on animals that take place at Larne Harbour. Britain is set to inform the EU of its plans for these facilities by June.

Britain proposes that checks on industrial goods are not necessary at the sea border and can take place through spot checks in shops and warehouses by agents employed by the Northern Ireland Executive. But as such goods could be driven directly from ports into the Republic and into the single market, this would appear to be a wide-open opportunity for smuggling, and the EU side is unlikely to agree to it.

What about goods from the rest of the world?

From January, the tariffs Britain applies on goods it imports from around the world will diverge from EU tariffs. According to its new global tariff schedule, published this week, Britain will drop tariffs to zero on a number of products.

Take the example of copper alloy tubes. The EU charges a 5 per cent tariff on imports of these from third countries with which it does not have a preferential trade deal. Britain says it will charge zero. Therefore, from January 1st smugglers could avail of a 5 per cent profit margin on copper alloy tubes from China if they can order them into Britain and then move them through the North into the Republic.

How does Britain intend to prevent this? Its paper states that goods entering Northern Ireland will need “new electronic import declaration requirements, and safety and security information”. But if there are no border checks, how can these be verified?

How are Irish goods told apart from Northern Irish ones?

Britain stresses in its paper that there will be “no change to how Northern Ireland goods arrive in Great Britain ports compared to today”. It assures there will be no checks, and even “no additional process or paperwork”.

However, a British source confirmed that goods from the Republic will be subject to checks, and that Irish companies will have to file an export declaration when selling into Britain.

So how are Northern Ireland goods to be told apart from the goods of the Republic? Officials could not answer how products could be distinguished without any process or paperwork taking place.

This potentially opens a hole to goods from anywhere in the EU accessing Britain’s market. An inability to guarantee the source of goods could be an issue as Britain tries to strike trade deals with new countries. It also raises fears among Northern Ireland businesses that their unique access into both the EU and Britain might not be so unique after all, and that they could be undercut.

The question is further complicated in the case of goods that have components from both the Republic and Northern Ireland. To give one example, Baileys Irish Cream is a cross-Border hybrid. How would it be determined which part of the island goods originated from? Perhaps by estimating a percentage of their make-up? Officials couldn’t say.