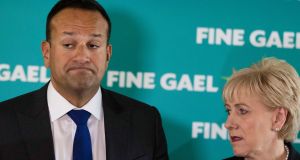 Some Fine Gael TDs have privately criticised Taoiseach Leo Varadkar for saying he would consider a grand coalition with Fianna Fáil after the next general election.

It was claimed by senior Fine Gael figures that such statements could help “rehabilitate” the Opposition party.

The Taoiseach made his comments about future co-operation with Fianna Fáil at the conclusion of the two-day Fine Gael parliamentary party think-in in Garryvoe, Co Cork.

“My intention and expectation is that we win the election as the largest party again.We form a government and we head a coalition. But I am certainly not ruling out any future arrangement with Fianna Fáil. Either confidence and supply or coalition.”

Fine Gael first offered a grand coalition to Fianna Fáil during the lengthy process of government formation after the 2016 general election. Enda Kenny’s offer was declined by Fianna Fáil leader Micheál Martin at the time.

However, Mr Varadkar said he would not underpin a Fianna Fáil-led minority government unless Mr Martin wins more seats than him at the next election. It means he would not facilitate Mr Martin’s election as taoiseach if Fianna Fáil, the Greens, Labour and others formed a coalition in a situation where Fine Gael was the largest party in the Dáil.

“We certainly would not entertain a situation whereby we were the largest party in the Dáil and we were then somehow asked to facilitate the second and fourth and fifth party forming a government,” Mr Varadkar said.

“Let there be no doubt about this. It is my intention and my plan and my expectation that Fine Gael will win the next election when it comes in May 2020.

“While confidence and supply has worked reasonably well for just over three years now, a majority government would be better for the country and that’s what I want us to be in a position to do.”

Some TDs and Ministers privately said they disagreed with the Taoiseach making the comments, claiming Fine Gael had spent its think-in describing Fianna Fáil as “reckless” only for Mr Varadkar to raise the prospect of bringing them back into government.

“We shouldn’t be doing anything to rehabilitate them,” said one Minister, adding that if Fianna Fáil won the next election then questions would be asked about Mr Varadkar’s own position as leader.

“If we don’t win the next election, who is to say it’ll be Leo Varadkar’s call?”

One TD said that while Fine Gael first offered a grand coalition in 2016, it “wasn’t an indefinite offer”.

“The strategically wise thing is to say: ‘Don’t think so at the minute, [Fianna Fáil is] overpromising everything to everyone. Sure how would we fit.”

The Taoiseach stressed he wanted to lead Fine Gael even if the party lost the next election.

“Our party rules are there for anyone to see. If after an election we are not forming a government then there is a ballot of Oireachtas members as to whether they want me to continue or not. But I will want to continue in that circumstance.”