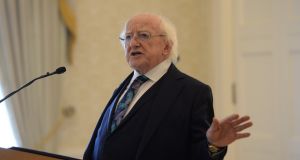 Taoiseach Leo Varadkar has said he does not think President Michael D Higgins overstepped the mark in commenting on Defence Forces pay this week.

“What the President said was that he believed that members of the Defence Forces should earn enough to provide for them and their families and I totally agree with that, but I wouldn’t stop there,” Mr Varadkar told reporters in Cork on Friday.

“I would say that applies to everyone in society and especially those who work in the public service.

Speaking at an event at Áras an Uachtaráin on Wednesday, Mr Higgins said: “It is not too much, I would suggest, to expect that serving men and women should have conditions including an income and prospects that are sufficient to provide for themselves and their families.”

The President went further and said the conditions under which members serve “should be exemplary” for other parts of society and economy.

Mr Varadkar said the Public Service Pay Commission (PSPC) had recommended an extra €10 million in allowances for the Defence Forces.

“That’s on top of the pay increases they’re getting in their basic pay,” he said.

“That’s worth over €1,000 to the average member of the Defence Forces. That is now on offer and that’s up to the representative bodies whether they’re going to accept that or not.”