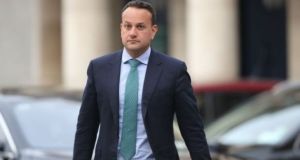 The Tánaiste said he had confidence in NPHET in relation to its public health advice but there were other considerations that needed to be taken into account. Photograph: Niall Carson/PA

Tánaiste Leo Varadkar has criticised the chief medical officer Dr Tony Holohan for announcing public health recommendations that were not “thought through” and without consulting the Government in advance.

Speaking on RTÉ on Monday night, after the Government had announced all counties were moving to Level 3 from midnight on Tuesday, Mr Varadkar said the advice of the National Public Health Emergency Team (NPHET) to move to Level 5 had “landed on us” by surprise on Sunday night.

Exposing deep tensions between NPHET and the Government, Mr Varadkar said Dr Holohan accepted there should have been prior consultation and there would not be a repeat of the incident.

The Tánaiste told RTÉ’s Claire Byrne Live he had confidence in NPHET in relation to its public health advice but there were other considerations that needed to be taken into account. While the members of NPHET were very well qualified in health matters, none “would have faced being on the Pandemic Unemployment Payment yesterday” and “none of them would have to tell somebody that they were losing their job”.

“So we thought that this is not the right way to do things, land something like this on a Sunday night, without prior consultation, without being able to answer very basic questions.”

By proposing a “circuit break” NPHET was recommending “something that has never been tried in Europe”, he continued.

“We didn’t feel it had been thought through properly. For example, we asked for some comfort that four weeks might be enough… They weren’t able to give us that comfort.”

Mr Varadkar said the Government asked whether it was credible to keep schools open during the lockdown. NPHET thought it was “but weren’t so sure”, he said.

“We asked them what do we say to the 400,000 people who would lose their jobs tomorrow and all those business… They thought that was a political matter for us.”

Mr Varadkar rejected NPHET’s claims that hospitals and ICU’s were about to be overwhelmed. This was “not shared by the CEO of the HSE. The HSE board were not consulted on this”.

What Ireland was doing was “very much in line” with what was recommended by the World Health Organisation and the European Disease Surveillance Centre.

“I look around Europe and countries that have a much higher incidence of the virus than us, pretty much every country in Western Europe, and none of them are going for this option. They’re all trying to live with the virus, bring in restrictions making sure there is adequate health care capacity.”

Asked if he had confidence in Mr Holohan after lambasting his plan as crazy and “ripping his rationale to shreds”, Mr Varadkar said he had but that such surprises being landed on Government could not happen again.

“I did not say it was crazy. I said it was not thought through and there was not prior consultation,” he said.

“I do think one thing that needs to be borne in mind, very good people, 40 of them but all coming from medical or scientific or civil service backgrounds. None of those people, for example, would have faced being on the Pandemic Unemployment Payment yesterday.

“None of them would have to tell somebody that they were losing their job and none of them would have to shutter a business for the last time. And I’m not talking about the economy, I’m talking about something that could have happened half a million human beings tomorrow and the reason why politicians make these decisions is because we’re the ones who can see then bigger picture.

The Opposition has demanded a full explanation from the Government on the reasons behind its public rejection of the NPHET’s advice.

The decision to depart from the NPHET recommendation also led to reservations being expressed by some Minsters at Monday evening’s Cabinet about the advisability of the course of action.

Sinn Féin health spokesman David Cullinane said the Government would have to explain its reasoning for its decision in the face of rising numbers.

He said there was nevertheless increased restrictions outside Dublin and Donegal which would bring more hardship on families.

“The Government needs to restore the payments they cut, restore the protections for renters, give workers and families the breaks and supports they need.

“They also need to ensure we have enough bed and ICU capacity in our health system, as well as ratcheting up testing and tracing.

Labour Party leader Alan Kelly said While a clear statement was given by the Taoiseach, he wanted to see the full data that informed the decision.

“I also want clarity on ICU bed capacity, and how Level 3 restrictions will be enforced. Clearer communications on any future moves between levels is essential to avoid public panic,” he said.

Social Democrats’ co-leader Róisín Shortall said in a tweet that it was hard to know what exactly the Government would do to reduce the current levels of Covid-19.

“There was no detail whatsoever provided by the Taoiseach. Inexplicably it is penalising counties with low levels and doing nothing new in some counties with high levels,” she said.

Paul Murphy of Rise said it was “pretty outrageous” for the Government to go against public health advice of a body it set up.

“The Taoiseach then refuses to face any questions from the media after delivering a speech about it,” he said.