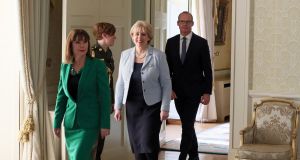 Newly-appointed Minister for Culture, Heritage and the Gaeltacht Josepha Madigan (front) arriving at the Áras in Dublin. Photograph: PA

Bertie Ahern, when he was taoiseach, had a rule about promotions to government. No first-term TDs became junior ministers, and nobody leapfrogged from the back benches to senior ministry.

It wasn’t unusual. Most taoisigh have stuck to it in one way or another. In the past 50 years you can count on the fingers of one hand the number of senior ministers appointed in their first term in the Dáil who bypassed the training scheme for prospective ministers.

There was Alan Dukes in 1981, the year Prof Jim Dooge was nominated to Cabinet from the Seanad. Heather Humphreys entered Cabinet in 2014, and Katherine Zappone, an Independent TD, became a Minister last year.

When he became Taoiseach, Leo Varadkar seemed an adherent of that tradition when he followed the rule in appointing his first Cabinet. Until Thursday, that is, when he named Josepha Madigan as Minister for Arts, Culture and the Gaeltacht.

It was one of three significant appointments the Taoiseach made in the wake of the resignation of former tánaiste Frances Fitzgerald. None were altogether surprising. Indeed, Simon Coveney’s elevation was widely expected given that he was the only other serious contender for leadership earlier this summer.

His appointment was praised by most Opposition leaders, who said that his status as deputy prime minister would give him added stature when leading Ireland’s negotiations on Brexit.

One of the roles of the Tánaiste is to take Leaders’ Questions on Thursday. The only doubts surrounding Coveney were around his availability for that slot given he is abroad a lot as Minister for Foreign Affairs.

In fact, his appointment gave rise to two genuinely funny moments in the Dáil on Thursday. Micheál Martin, who shares a constituency with Coveney, praised the Taoiseach for finally recognising “the deep reservoir of talent in Cork”.

Not to be outdone, Sinn Féin deputy leader Mary Lou McDonald mused there was a real Cork blas to the Government now. “There is Simon and Michael Creed and Jim Daly, even though I can’t see him here, and, of course, there is Micheál Martin!”

The move of Heather Humphreys to Fitzgerald’s vacated Business and Enterprise portfolio will probably suit her. The Monaghan TD comes from a business background and managed a credit union. With Brexit imminent, the fact she comes from a Border constituency is considered useful.

While she recovered well after an appalling start as a Minister, and was praised for her work during the 1916 commemorations, she was never considered a natural fit for the Culture and Arts portfolio.

It is not Madigan’s background either. Aged 47, she is a solicitor by profession, specialising in family law, and very much seen as being in the classic mould of a pro-business Fine Gael TD.

She has been active on the backbenches, bringing forward two pieces of private members’ legislation which have been accepted by Government, the most recent a divorce Bill that will truncate the period during which a separated couple must live apart before a decree is awarded.

She was also a very visible and strong supporter of Varadkar during the leadership campaign.

She courted controversy in 2014 when she opposed council plans for a halting site near her political base in Dublin’s Mount Merrion. She denied it was “nimbyism” and employed the argument that it made no economic sense to house four Traveller families on a site that was worth €6 million to €7 million. She said the council could sell the land and use another site to house more families.

The argument did not convince her opponents, who accused her of being anti-Traveller.

McDonald made a veiled reference to that in the Dáil on Thursday, calling for her to advance the cause of diversity, including recognising “the rights of our Traveller citizens”.

Socialist Party TD Ruth Coppinger said in the Dáil it was incredible that Varadkar had appointed a Minister for Arts and Culture who had a “track record of anti-Traveller bigotry and anti-Traveller culture”.

Madigan shook her head vigorously as the allegation was being made.

Speaking to RTÉ later, Ms Madigan said: “I have a very good relationship with the Traveller community. I have nothing to apologise for in terms of my position. I am all for inclusivity and for equality in every aspect of society.”

There is no doubt that the gender balance of Varadkar’s Cabinet played on his mind. He was criticised in June for not appointing enough women to senior positions. With the loss of Fitzgerald it would have meant there were only three women Ministers out of 15, in addition to one Super-Junior (Mary Mitchell O’Connor).

Another component of Madigan’s new portfolio is the Gaeltacht. In theory, the job requires proficiency in Irish, mar dhea, but her predecessor had none. Unless the new Minister is a secret Gaeilgeoir, we should expect responsibility in this area to continue to be the sole province of Joe McHugh.