Varadkar and the media: reputation as progressive leader is tarnished 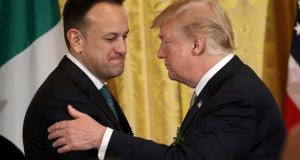 Taoiseach Leo Varadkar and President Donald Trump at the White House in March: Trump’s attacks on the press have escalted since he became president. Photograph: Win McNamee/Getty Images

Following the fatal shooting at the Capital Gazette newspaper in Annapolis, Maryland last week, the Committee to Protect Journalists reported that the United States was the third deadliest country for journalists, behind Afghanistan, and Syria. Newsrooms around the country went on lockdown, and at the National Press Club, one block from the White House, members gathered and mourned.

This is the backdrop against which the Taoiseach, Leo Varadkar, expressed sympathy for Donald Trump’s stance towards the media, in comments to a luncheon in New York on Tuesday, as flags still hung at half mast in Maryland mourning the five members of the Capital Gazette staff who were killed.

Varadkar was in the US to advocate for Ireland to win a seat on the UN Security Council, something which the Taoiseach has said would place Ireland “at the heart of UN decision-making on international peace, security and development.”

The comments, made to what was reportedly a group of young Irish expatriates working in media, as well as other industries, are particularly striking given the current climate of ongoing attacks against the media in the US.

While a reporting fellow with the International Women’s Media Foundation in the Democratic Republic of the Congo in 2014 , I underwent hostile environments training, fairly standard for foreign correspondents such as myself working in conflict and post-conflict zones.

In 2016, the trainers of that seminar, Paul Burton and Frank Smyth of Global Journalist Security, began training US journalists preparing to cover political campaigns, so venomous were the attacks on the press by then-presidential candidate Donald Trump, who called the media “the enemy of the people” “dishonest,” “not good people,” “sleazy,” and “among the worst human beings [he] has ever met.”

Trump’s attacks on the press have escalated since he became president, calling out individual journalists by name at rallies, tweeting vitriol in their direction, and painting all media as “fake news” as a means to undermine often legitimate investigations into his conduct, relationships and ethics.

Journalists have been assaulted at rallies by attendees, and security forces. They’ve been arrested while attempting to cover events. They’ve been threatened online and in person with physical harm. They’ve had their credentials revoked, and their access blocked, in a country where press freedom is so enshrined into the constitution that many consider the First Amendment – which guarantees the freedom of expression by prohibiting Congress from restricting the press or the rights of individuals to speak freely – the cornerstone of American democracy.

In the US, Varadkar is seen largely as the face of a modern, multicultural society. The images of him marching proudly with Canadian prime minister Justin Trudeau – who immediately and forcefully issued support for journalists and condolences to the victims of the Annapolis shooting – his support of Repeal the Eighth, and his joining the St Patrick’s Day parade in New York City this year with his partner Matt Barrett signaled an Ireland that cares for the rights of its people, and people around the world.

That image offers a stark contrast to the current image of the US, where access to reproductive health care is becoming more and more restrictive, the Supreme Court just voted that a baker could deny a gay couple a wedding cake, and harsh immigration policies signal a vision of America that is at odds both with our founding, and our current existence.

With Varadkar’s comments on the media – and his siding with Trump – that reputation as a progressive, global leader is tarnished. Instead, it appears that Varadkar all too readily adopted the anti-press rhetoric of a reality show executive with a history of manipulating the media now frustrated to discover he can’t edit the ugly bits away in post-production. It might endear Varadkar to the current US administration, but that effect is likely to be short-lived.

Varadkar’s bid for the UN Security Council seat comes at a time when Ireland has dropped two places on the Reporters Without Borders World Press Freedom Index, due to the country’s consolidation of its media companies.

If Varadkar truly wants Ireland to take its place at the centre of international peace, security and development, what better way, and in what better time, for him to position Ireland as a leader in championing a free and independent press the world over, where journalists are able to practise without threat of harm or death, from its citizens or its leaders.

The opportunity is there, and it’s worth seizing.

Molly McCluskey is a former EU correspondent in Ireland and the UK and is now based in the US, where she is a journalist, public speaker, and press freedom advocate. She is a member of the Board of Governors of the National Press Club in Washington, DC