Businessman Denis O’Brien is the focus of a special documentary, while Donegal teenager Amybeth McNulty returns in ‘Anne with an E’ 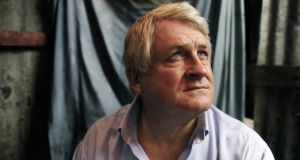 Good Girls
Tuesday, Netflix
Christina Hendricks heads up a cast of criminal moms in this comedy-drama that sounds like Desperate Housewives mixed with Thelma and Louise. Hendricks plays Detroit mother-of-four Beth, who is fed up being left to make ends meet while her husband cheats on her. So she joins forces with her sister Annie (Mae Whitman), a single mom battling with her ex for custody of her daughter, and her best friend Ruby (Retta), a waitress trying to keep up the payments for her daughter’s dialysis, to rob the local grocery store.

But when the haul from their robbery turns out to be much more than expected, the three moms realise they’re into something bigger and deadlier than they dreamed.

Rebel Pope
Tuesday, RTÉ One, 11.30pm
Documentary charts the rise of Jorge Mario Bergoglio who would become Pope Francis, the first Jesuit and Latin American head of the Catholic Church. It looks at his pre-Vatican life with interviews from those close to him during this time. His radical views would stir controversy in some circles, but also put him in line to lead one of the world’s oldest and largest religious institutions. It looks at  how his beliefs evolved and what the influences were that shaped him on his path to the papacy.

Denis O’Brien: The Story So Far
Wednesday, RTÉ One, 9.35pm
This documentary profiling Denis O’Brien by RTÉ’s David Murphy promises an insight into the life and times of one of Ireland’s most well-known businessmen. O’Brien has never been far from the spotlight – and controversy: from early ventures including a home shopping channel which collapsed, to the launch of telecoms group Esat and the award of the second mobile phone licence. It includes an interview with former minister Michael Lowry in which he rejects the findings of the tribunal which accused him of “securing” the licence for O’Brien.

The story goes right up to the present day where O’Brien now owns telecoms group Digicel, with 14 million customers in the Caribbean, and is the biggest private media owner in Ireland.

Former US president Bill Clinton discusses O’Brien’s philantrophic work, while athlete Usain Bolt – who has been sponsored by the company – is also on hand.

O’Brien, who is is the biggest private media owner in Ireland, has been the focus of boardroom battles at Independent News and Media over the years and the documentary examines recent allegations of a data breach at the company and the fallout. It includes contributions from former INM executives Gavin O’Reilly and the company’s late chairman James Osborne.

Top Gear
Thursday, RTÉ 2, 8.30pm
While Clarkson, May and Hammond tool around the world in The Grand Tour, the BBC doggedly clings on to the wheel of Top Gear, hoping to steer it back into the hearts of TV viewers. So far, though, presenters Matt LeBlanc, Chris Harris and Rory Reid have lacked that shambolic, snidey camaraderie that made the original trio so much fun. They are, however, slick and professional, so if you’re a petrolhead who cares not for comedic chemistry, then Top Gear will still get you revved up.

This series sees LeBlanc, Harris and Reid gunning their V8 engines on a journey across America’s Wild West, in sports cars from McLaren, Jaguar and Ford, while Rob Brydon takes his own trip in the Reasonably Fast Car. We’re promised “fun and friendly rivalry”, which of course is not a patch on the cruel, ruthless and totally puerile rivalry we were used to before.

Summer telly is dominated by either Love Island or the World Cup, but here’s a football story that will stop you in your tracks. Former Man United and England star Rio Ferdinand lost his wife Rebecca to cancer in 2015, and in this documentary, he shows what life is like having to be both mum and dad to his three children, as well as friend, protector and bereavement counsellor.

The football legend reveals how he is still trying to come to terms with Rebecca’s death at just 34, and he meets other families who have suffered similar loss to learn how they have managed to cope.

Anne with an E
Friday, Netflix
They can give it a fancy new name to appeal to the rave generation, but this is just an updated version of Anne of Green Gables, a TV series some of us may remember from a long distant childhood. There are no actual class A drugs in this series about childhood innocence, clippety horsecarts and Easter bonnets, but there is Irish actor Amybeth McNulty, who has lit up the series with her charm and sass.

It’s based on Lucy Maud Montgomery’s classic novel, about a spirited young orphan girl in the 19th century who changes the lives of everyone around her (for the better, of course – this isn’t Irvine Welsh). Series one was a big hit, thanks to its young star, and series two promises more of the same heartwarming, nostalgic drama. You mark my words, remakes of The Waltons and Little House on the Prairie are not far behind.