The eight best shows to watch on Netflix in July

The official trailer for season two of Anne With an E, a Netflix series based on the novel "Anne of Green Gables." Video: Netflix 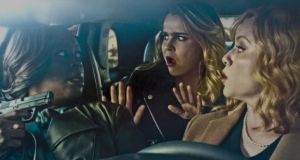 Good Girls (Netflix, July 3rd)
Who doesn’t want to see Mad Men’s Christina Hendricks and Retta from Parks and Recreation gleefully tear apart a supermarket in ski-masks, bash through the walls of beige suburbia and unleash their righteous anger on a world that doesn’t play fair?

Good Girls, a new series by Scandal’s Jenna Bans, is 9 to 5 with the fierceness of Thelma and Louise and the glossy sheen of Desperate Housewives. The show is a riotous revenge dramedy that sees sisters Beth (Christina Hendricks) and Annie (Mae Whitman) and their best friend Ruby (Retta) attempt to gain control over their turbulent relationships and financial woes by planning a heist job. Tired of playing their expected societal roles of dutiful wife, the preyed-upon object of desire and the poor, overworked mother, the trio team up to rob a grocery store.

As always, pulling off the perfect crime has its consequences, as the novices come to the attention of some local gangsters who won’t let them disappear back to their nondescript lives so easily.

The acrid chemicals, destructive narcissism and mindless violence of Breaking Bad couldn’t be further from the lilac-scented bucolic idyll of Green Gables, but the celebrated drama series writer Moira Walley-Beckett surprised audiences with her similarly complex adaptation of Lucy Maud Montgomery’s classic about the wilful, russet-haired orphan when it debuted last summer.

With its sumptuous scenery and lavish cinematography, Anne With an E was a soothing balm for the eyes. The series won praise for its delicate tenderness but also the ability to sew a realistic thread of melancholy through the rich emotional tapestry of Anne’s life, with a layer of gritty authenticity dusted over the sweetness of the original.

Walley-Beckett’s Anne is infused with a determined Bronte-style feminist spirit, and beneath the wistful, dreaminess lies the steely soul of a survivor. Amybeth McNulty’s depiction of the wide-eyed yet wise young girl is a star-making turn, free from the cloying cheeriness of other child actors.

Returning for a second season, it sees Anne face new challenges as she grows older, with the show acknowledging the indelible sentimentality attached to the passing of childhood. She is still cosseted in the safety of her imagination, but the wider world is tugging at her sleeve impatiently.

Sugar Rush (Netflix, July 13th)
In the last season of Aziz Ansari’s Master of None, his character Dev ended up hosting a fast-paced baking competition entitled Clash of the Cupcakes, which challenged its contestants to come up with ever more intricate sweet treats in record time. This summer Netflix have concocted a show called Sugar Rush which pretty much works under the same premise but minus the silent, mask-wearing dance troupe the Jabbawockeez.

Sugar Rush is the vanilla essence of The Great British Bake Off squirted into the jam-packed frenzy of Ready Steady Cook. Its clock-watching ensures that there will be tears shed as an elaborate tiered cake inevitably collapses to the ground.

It may feature professional judges such as Australian chef Adriano Zumbo and Candace Nelson (the founder of Sprinkles who spread the scourge/cult of cupcakes) but really, it’s a bakery version of You’ve Been Framed. It’s a chance for viewers to enjoy watching expert confectioners’ dreams being crushed like a rogue packet of royal icing at the bottom of the shopping bag.

Amazing Interiors (Netflix, July 20th)
Amazing Interiors gives nosey viewers the opportunity to go behind the doors of some unassuming homes that feature incredible décor showcasing the homeowners’ unique style. This is not the bland tastefulness of the Swedish utility design beloved by Dermot Bannon and his ilk – this is more an extension of people’s personalities sketched throughout their homes.

From flamboyant houses full of shocking pink feathers, frills and fancy upholstery to entire worlds built behind modest four walls, the extreme aesthetics are not for fans of minimalism. It may not reach the surreal levels of the Seinfeld episode where Kramer constructs the Merv Griffin set in his apartment, but the surprises revealed within the seemingly identikit abodes are truly fascinating.

Acclaimed director Drake Doremus (Like Crazy) has returned with Zoe, Amazon Prime’s much anticipated sci-fi drama. Featuring an all-star cast including Ewan McGregor, Léa Seydoux, Rashida Jones and Christina Aguilera (in her first acting role since the iconic Burlesque), it’s a chilling look at the future of romance and relationships in our rapidly evolving society.

The film follows themes explored in Charlie Brooker’s Black Mirror and Spike Jonez’s Oscar-winning Her, concentrating on the sinister effects that technology has had on our ability to connect with each other and the vast changes it has made within the dating world.

Seydoux and McGregor play Zoe and Cole, two researchers working in a lab that engineers technology that supposedly perfects romantic relationships. As they become heavily involved in their work they disclose more profound information about human nature than they could have possibly imagined.

Welcome to the Family (Netflix, July 27th)
With Eugene Levy’s genius Schitt’s Creek and its investment in Arrested Development, Netflix has cornered the market in the dysfunctional family sitcom. Welcome to the Family is the story of a streetwise single mother who teams up with her father’s girlfriend to try to cover up his death after he leaves them out of his will.

The Bleeding Edge (Netflix, July 27th)
Netflix’s latest documentary comes from the award-winning filmmakers behind The Hunting Ground and The Invisible War, Kirby Dick and Amy Ziering, The Bleeding Edge is an investigation into America’s $400 billion medical device industry.

Weaving the narrative between individual stories and pragmatic, factual argument, the film focuses on serious issues that consumers have experienced with products such as Essure, the permanent contraception used by millions of American women, a “vaginal mesh” used in gynaecological procedures as well as robotic surgery which is becoming more widely used to treat patients for hip replacements and hysterectomies.

Exposing negligent practices, problems with lobbyists, and insufficient legislation and regulations, the film points the finger at the relationship between the FDA and medical product distribution companies, which has become more intertwined since the beginning of the Trump administration and the appointment of current FDA head Scott Gottlieb.

It’s a stark, damning look at how the healthcare system in America, embroiled in big business, is failing to aid those in need – especially its women.

The ladies of Litchfield left us on a cliffhanger, with season five taking place in real time over the course of a three-day riot which saw the inmates getting a taste for power and retribution as the chaos mounted. The details of season six have been a closely guarded secret, other than the confirmation that those involved in the seizure of the prison will be severely punished.

For fans that felt that the last series lacked the electrifying dynamics of previous seasons, they’ll be happy to hear that actor Adrienne C Moore, who plays Cindy Hayes on the show, has described the forthcoming season as “an amazing facelift”. The show’s creator Jenji Kohan has admitted that due to formative writers leaving at the end of the fourth series the crime dramedy almost descended into “fan fiction”.

Season six is not a cliché “return to form”, but rather a re-energised show that pits the inmates against each other in a battle for survival where paranoia and fear reign and the trust built in friendships has been completely dissolved.

Eat. Race. Win. (Amazon Prime, July 27th)
Amazon’s Eat. Race. Win. is a cookery show on wheels. It follows Hannah Grant, the first female chef at the Tour de France, as she provides meals for the Australian pro-cycling team Orica-Scott. The show mixes fitness with food as Grant sources the finest, healthiest ingredients to create a menu that not only will sustain the cyclists on their exhausting 2,200-mile journey, but will also give them much-needed variety and, most importantly, taste good.

A veteran of Heston Blumenthal’s experimental restaurant The Fat Duck, Grant is no stranger to improvising and creating new culinary ideas on the fly, which comes in handy with the gruelling race schedule and the need to keep up to speed with the demands of the team.