Abortion battles rage on in France despite liberal regime

Terminations and related expenses are covered by state with 211,900 performed in 2016 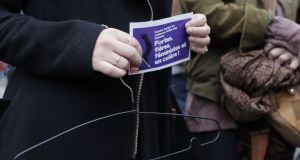 A demonstrator holds a cloth hanger and a sign reading “Strong, proud, feminist and angry” during a protest for abortion rights in Paris. Photograph: Thomas Samson/AFP/Getty Images

There are two types of abortion in France.

Voluntary abortion is legal without restrictions until the 12th week of pregnancy, while the medical interruption of pregnancy can be performed up to the very end if there is a serious threat to the life of the mother or a grave abnormality in the foetus.

Until 2014, abortion was available to every woman “in a state of distress”. That qualifying condition no longer exists.

Instead, abortion is considered the right of every woman, regardless of her motives, fully reimbursed by French social security. Since April 2016, related medical expenses such as blood tests, sonograms and painkillers have also been reimbursed.

Women are offered the option of counselling, which remains compulsory for minors. Abortion pills may be dispensed through the fifth week of pregnancy in outpatient clinics, or until the seventh week in hospitals. Fifty-seven per cent of abortions are induced by pills.

Abortion by vacuum aspiration, under local or general anaesthesia, is practised through the 12th week.

There were 211,900 abortions carried out in France in 2016, according to Le Planning Familial, the French branch of the International Planned Parenthood Federation. That compares with 785,000 live births, for a population of just under 67 million, although the number of abortions has fallen for the past three years due to better contraception.

Under a 1920 law, the woman who aborted, the person who performed the abortion and, in some cases, the father, risked criminal prosecution.

A famous petition written by the existentialist philosopher Simone de Beauvoir, published in the magazine Nouvel Observateur in 1971 and signed by 343 people was seen as the turning point. It read: “A million women have abortions every year in France, in dangerous conditions … I declare that I am one of them. I declare that I have aborted … We demand free abortion.”

President Valéry Giscard d’Estaing, elected in 1974, was determined to legalise abortion. He asked his health minister, the Holocaust survivor Simone Veil, to defend the draft law in the National Assembly. During a debate lasting three days, one deputy played a recording of the heartbeat of a foetus.

Christine Mauget, head of international relations at Le Planning Familial, has watched the debate in Ireland with great interest. Rejecting the idea of allowing abortion only under specific conditions, such as risk to the physical and or mental health of the woman, she says: “It remains a matter of judgment, and makes women the hostages of the doctors who assess them.”

Despite France’s liberal abortion regime, Le Planning Familial says its struggle is not over. More than 100 French abortion clinics have closed in the past decade, mainly because they are unprofitable and unattractive for doctors and nurses.

In France, 97 per cent of infants diagnosed with Down syndrome are aborted.

Jean-Marie Le Méné of the Fondation Jérôme Lejeune, one of the leading French anti-abortion movements, says the use of prenatal testing followed by abortion to eliminate abnormal foetuses constituted “a rejection of nature”, “eugenics” and “euthanansia”.