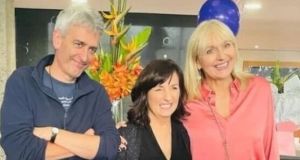 Broadcasters David McCullagh and Miriam O’Callaghan with a retiring colleague (centre) at a gathering in Donnybrook.

The use of Garda time to investigate alleged breaches of public health advice at an RTÉ retirement party has been questioned in the Seanad, as Senators disagreed over the handling of the controversy.

Fianna Fáil’s Timmy Dooley said An Garda Síochána has to respond to reports and complaints when they are made.

However, he added that “anyone who thinks it is good use of Garda time to be hanging around Montrose wondering who sent out an email and whether it complied with the strict letter of the guidelines, has a fundamental misunderstanding of how this State is policed”.

“We should be closing gates rather than opening them and the sooner we get the RTÉ gate closed, the better for everyone,” he said of the gathering at which a number of RTÉ presenters posed with a retiring colleague without wearing masks or adhering to social distancing guidelines.

Independent Senator Sharon Keogan said that those who demand accountability from others “should equally be held to account”.

“It is impossible to avoid comparison between the RTÉ retirement party we have seen photographs of and the so-called Golfgate,” she said.

“That event generated a media frenzy culminating in high-profile political resignations. Top-paid journalists in RTÉ demanded accountability for those in positions of power or those in the public sphere.

“They subject such people to persistent scrutiny. They point the camera lens and microphone at them, as they should.

“At the same time, however, those who demand accountability from others should equally be held to account. We cannot have one rule for the majority and another for those with such a platform.”

The former minister said “we have become a society that has set bars and RTÉ set its own bar very high”.

Ms Doherty said “we are supposed to be all in this together. This means we can have differences of opinion but we must all look out for each other and recognise we are human, with frailties”.

Ms Keogan said Article 40.6.1° of the Constitution refers to the media as the “organs of public opinion”. She said that “RTÉ, as the national broadcaster, enjoys a privileged position among these organs of public opinion, and not least because it receives almost €200 million annually from the licence fee payer who is compelled by law to pay”.

“The licence fee payers and members of the public listen to the news and headlines as framed by those working in the top echelons of RTÉ,” she said.

Hitting out at RTÉ’s coverage of the pandemic, Ms Keogan added that “often the news coverage was far from dispassionate in tone, which is how it ought to be.

“Often the coverage bordered on moralistic or sensational, lecturing and scorning those who strayed from strict compliance to social distancing rules.”

She welcomed the Garda inquiry and that RTÉ management would address the issue at the Oireachtas communications committee on Wednesday.