US secretary of state appoints former senator as envoy to NI 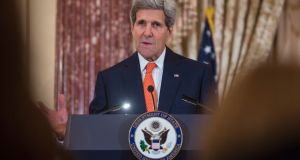 The United States has appointed former senator and presidential candidate Gary Hart as an envoy to Northern Ireland to play “a direct, on-the-ground diplomatic role” in the latest round of talks.

John Kerry, US secretary of state, named Mr Hart as the latest American representative to the region saying that he was confident the former senator, whom he described as a “longtime friend,” would “help strengthen the institutions and economy of Northern Ireland as well as reinvigorate attempts to promote a shared society.”

Mr Hart is expected to visit Belfast by the end of this month.

The appointment confirms expectations that Mr Hart would be installed as the new US representative, particularly in light of the latest Northern Irish all-party talks on parades, flags and the past, convened by the British and Irish governments, starting on a rocky path.

Mr Hart, who was a senator for Colorado from 1975 until 1987, was asked by Mr Kerry to travel to Northern Ireland to meet political leaders in August to assess the state of the peace process.

The secretary of state said in a statement that the former senator had spent “many weeks” in Ireland over the past 30 years.

“He has listened and spoken to the people of Northern Ireland, and he knows many of the leaders,” said Mr Kerry.

“I’ve asked Senator Hart to support the parties in Northern Ireland as they enter a new round of talks to achieve a lasting peace. We welcome these new talks, supported by the United Kingdom and Ireland.”

Mr Kerry said the State Department had engaged Mr Hart for almost two years on other matters and that he had agreed “to devote some additional time to engage in the tough and patient work of diplomacy as many personal representative, including on issues related to Northern Ireland. He does so with my confidence and trust.”

He described him as “one of our country’s most respected and accomplished senior statesmen, creative and strategic thinkers.”

The US consul general in Belfast Greg Burton will serve as Mr Hart’s deputy for his Northern Ireland work, Mr Kerry said.

Minister for Foreign Affairs and Trade Charlie Flanagan said that Mr Hart’s appointment represents “an important step forward as we seek to resolve the current political impasse and build an enduring and a reconciled society.”

“Senator Hart’s political experience, analytical skills and his knowledge of Ireland will be immensely valuable as he undertakes his new role,” he said.

“The preliminary contacts he has already had with stakeholders in the process will also stand to him.”

Mr Hart is the latest American representative to be sent to Northern Ireland following the collapse of the last all-party talks in Northern Ireland, chaired by former US diplomat Dr Richard Haass.

The former senator sought the Democratic presidential nomination in 1984 and 1988. The latter bid ended when the married politician was embroiled in a scandal involving his relationship with a 29-year-old model and a photograph of the woman sitting on Mr Hart’s lap next to a yacht called Monkey Business.