US concerned over reports of pact between Ulster Unionists and Tories 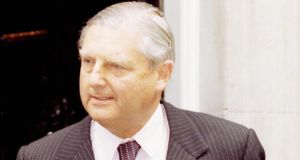 Sir Patrick Mayhew: “I said no deal had been done.” Photograph: Russell Boyce/Reuters

The US administration voiced concern a quarter-century ago of reports of a pact between Conservatives and Ulster Unionists at Westminster, fearing any such deal would impact negatively on Northern Ireland.

The issue arose at a meeting in London between Northern secretary Sir Patrick Mayhew and the American ambassador to the UK Ray Seitz on July 23rd, 1993, newly declassified files show.

The ambassador inquired about the motivation of the unionists in supporting John Major’s government, asking Mayhew: “Has a deal been done?”

In a report to officials, Mayhew stated: “I said no deal had been done and I believed they were influenced by what they had seen of a future under a Labour government” and, in particular, the views of Labour’s Northern Ireland spokesman Kevin McNamara.

However, Seitz replied that “nevertheless, considerable suspicion would exist in Ireland and nationalist circles that [the British government] had done some deal incompatible with the objectives of the peace process”.

Mayhew reiterated that no deal had been done. The ambassador had accepted this but observed “that there would be considerable interest in Irish-American circles and that anything that was bugging Boston would soon be conveyed to the White House”.