Up to 6,000 women require repeat smear test due to backlog

CervicalCheck will be contacting affected women by the end of next week, HSE says 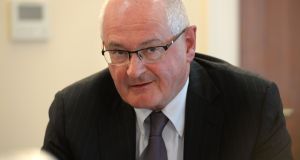 Up to 6,000 women will need to undergo a repeat smear test due to delays processing their original smears following the CervicalCheck scandal, the Health Service Executive (HSE) has said.

Dr Peter McKenna, clinical director of HSE Women and Infant’s Health programme, said slides from women retaking smear tests would be processed as a matter of “priority” by laboratories.

The HSE said both repeat and routine smear tests were experiencing delays due to increased demand. In the past, it took four to six weeks for a result, but currently, results were taking an average of 22 weeks, and some are taking slightly longer.

In the immediate aftermath of the CervicalCheck controversy last spring, the Government promised that all women could avail of a free smear test, leading to a large increase in smears to be processed, putting pressure on the system.

Dr McKenna said it was a “precaution” that some women would be recalled for a second test, due to the length of time it took to process their first one.

He said “evidence shows that HPV tests of this kind are effective outside the manufacturer’s recommended timeframe,” however the HSE would likely be asking some women to take repeat smears, to provide the screening service with “reassurance”.

Quest Laboratories, one of the labs contracted by the HSE under the CervicalCheck screening programme, informed the HSE of the issue in late November.

The lab told CervicalCheck of “a specific problem in relation to standard HPV tests that have been carried out outside of the manufacturer’s recommended timeframe since secondary HPV screening was introduced,” a spokeswoman for the HSE said.

Damien McCallion, interim director of the HSE National Screening Service, said an expert clinical team had been established to review the situation. Mr McCallion said by the end of next week the screening service would be writing to affected women, who will need to attend their GP for a second smear test.

“We sincerely apologise for any concern that that may arise as a result of this,” he said, adding the service was committed to communicating openly with all women affected.

Speaking in the Dáil on Wednesday, Fianna Fáil leader Micheál Martin said the screening programme, which had saved many lives, was “now in crisis mode” and it was his information that the programme was in jeopardy.

Demanding Minister for Health Simon Harris come into the Dáil and give a full explanation, he asked Taoiseach Leo Varadkar when he had been told about the delays.

Mr Varadkar said Mr Harris’s offer of free smear tests was a response to the anxiety of many women that their tests may have been misread in the wake of the controversy over false negative results.

“It was done in good faith for good reasons. It was never intended to be a permanent offering,” and the free testing ended in December, Mr Varadkar said.

Mr Martin said the decision taken by Mr Harris to offer re-testing to women concerned about their smear results was taken against official advice.

It was the expert advice that the re-testing would “damage the efficacy of the programme, would delay and cause backlogs and was not clinically warranted”.

There was now an enormous backlog. “It is my understanding that the delay has impacted on the quality and efficacy of the tests and rendered a significant number of them invalid.”