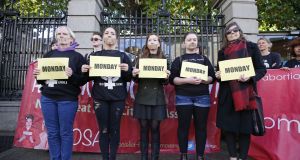 Repeal activists outside the Dáil on a recent day the Oireachtas committee on the Eighth Amendment was sitting.

Three Fianna Fáil members of the Oireachtas committee on the Eighth Amendment have called for it to support making abortion available up to 12 weeks without restriction.

In a joint submission to the committee, Senator Ned O’Sullivan and TDs Billy Kelleher and Lisa Chambers outline their belief that terminations should be accessible when the life and the health of a mother is at risk. There should be no distinction between the mental or physical health of the mother, they add.

Members were asked to provide proposals to the committee yesterday, ahead of votes next week.

It is expected the committee will recommend the repeal of Article 40.3.3 of the Constitution. The Eighth Amendment, which inserted the article into the Constitution in 1983, guarantees to protect as far as practicable the equal right to life of the unborn and the mother.

The submission by the three Fianna Fáil members recommends a GP-led service up to 12 weeks for terminations without reason. This, they say, will deal with the complexities surrounding rape and incest and the difficulties in legislating for same.

The two other Fianna Fáil members of the committee – James Browne and Anne Rabbitte – did not provide submissions yesterday.

Eleven of the 21 committee members, including the three Fianna Fáil members and the three Sinn Féin members, said it should recommend the decriminalisation of abortion. Currently abortion carries a 14-year jail term in Ireland.

Fine Gael TDs Kate O’Connell, Bernard Durkan, Hildegarde Naughton and Senator Jerry Buttimer also tabled a number of motions for the committee to consider. They include recommending a review of sexual health education, including in the area of contraception and the issue of consent, and the introduction of a scheme to provide for free contraception.

Anti-abortion Independent TD Mattie McGrath recommended abortion should not be allowed on the basis of suicidal ideation, which is provided for in the Protection of Life During Pregnancy Bill. Mr McGrath said the evidence has demonstrated abortion is “not a viable treatment” for suicidal ideation.

On the issue of terminations when there is a serious risk to the physical health of the woman, Mr McGrath says this can be addressed by way of ordinary legislation and, if required, amended medical practice guidelines.

The committee will begin considering the proposals at a meeting next week and votes will also take place. The committee’s recommendations will then be sent to the Oireachtas for consideration ahead of a potential referendum next year.

In the event the committee recommends abortion should be provided up to 12 weeks without reason, The Irish Times has learned the legislation allows for a GP-led service to be introduced. It is understood a woman would be asked to present to her doctor seeking a termination, a three-day wait will be required, and an abortion pill would be provided thereafter.

If the Oireachtas committee recommends exception-based legislation, a clinician will determine if a termination should be provided.

There will be no request to provide proof if seeking an abortion on the grounds of rape or incest. Similar to the Protection of Life During Pregnancy Act, there will be a requirement to seek a second opinion before a termination is provided and there will be an option to appeal.