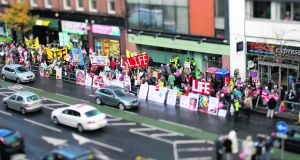 Marie Stopes UK is closing its independent clinic in Belfast on December 8th, following the British government’s move earlier this year to fund abortions for women from Northern Ireland.

In a statement, it said the decision would enable the charity to “focus its resources so that Northern Irish women can better access funded treatment in England”.

The clinic has been the scene of protests by anti-abortion activists since it opened in 2012.

In the North, access to abortion is only permitted if a woman’s life is at risk or there is risk to her mental or physical health that is long term or permanent. Fatal foetal abnormalities, rape and incest are not circumstances in which abortions can be performed legally.

Marie Stopes managing director Richard Bentley said: “Ultimately, we believe that Northern Irish law should change to give women the right to access services without having to travel to England. “Until that happens, we will continue to provide funded treatment for Northern Irish women in England – services that they should be legally granted in Northern Ireland.”

In June, the Supreme Court in London narrowly upheld a ban on NHS-funded abortion care in England for women from Northern Ireland due to “respect” for decisions of the region’s Assembly.

This prompted British Labour Party MP Stella Creasy to propose an amendment to the Queen’s Speech calling for Northern Ireland women to have access to free abortions in England, where the 1967 Abortion Act applies, which resulted in the new provision.

The DUP does not support any change to abortion law in Northern Ireland. It does not favour extending the 1967 Abortion Act, which applies in Britain and its MPs were opposed to Ms Creasey’s amendment at the time.

At Sinn Féin’s recent ardfheis, the party voted in favour of a motion which extends support for abortion in cases of foetal abnormality and sexual crime. However members stopped short of supporting pro-choice motions.

Green Party NI MLA Clare Bailey said the fact that women and girls can now access abortion in England for free has clearly impacted on the service. “I am proud of my time as clinic escort, and to have been part of such a transformative movement,” she said. “While the Public Prosecution Service has now stated clearly that they can see no risk of criminal prosecution for NHS employees in Northern Ireland who refer women to NHS hospitals and clinics in the rest of the UK for abortions, I have written to the Permanent Secretary of Health Richard Pengelly to update me on the Department’s progress on providing guidance to GP’s on the new access provided in England with regards to free abortions and ensuring a clear pathway for women accessing abortion from Northern Ireland in the rest of the UK. As yet I have not received a satisfactory answer.”

Emma Campbell, co-chair of Alliance for Choice Belfast, said: “We are so glad that the clinic operated here for five years so that women from all over the island could avail of its services.

“It is time now to change the law in the North and South so that free safe and legal abortion can be accessed by those that require it. The clinic changed conversations and hearts and minds for that we will be eternally grateful.”

She said the closure is all down to the dedication, commitment, and hard work of Precious Life volunteers. “We will now accelerate our efforts in helping women with unplanned pregnancies, liaising with agencies like Stanton Healthcare NI — because women and babies deserve better than Marie Stopes.”