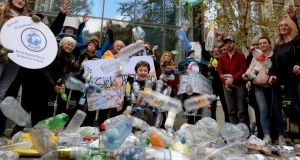 Environmental campaigner Flossie Donnelly, up to her neck in single use plastic during a protest by Sick of Plastic campaigners at the Department of the Environment on Adelaide Road. Photograph: Alan Betson / The Irish Times

New levies due to be introduced on disposable cups and plastic bags are not a “grab for money”, the Minister for Climate Action and Environment Richard Bruton has said.

Mr Bruton said “every cent” raised by the levies, will be “ploughed back into environmental measures” such as clean-ups, anti-dumping actions and the promotion of better waste practices in the community.

A public consultation on a range of levies was launched by Mr Bruton on Wednesday. The levies, if introduced, would be rolled out on a phased basis from 2021.

The exact level of the levy on disposable cups will depend on “market research”, but it is expected to be either 10 cent, 15 cent or 25 cent.

The existing plastic bag levy would increase from 22 cent to 25 cent and be extended to medium weight plastic bags. A €5 per tonne waste recovery levy that would apply to landfill, waste and export and an increase in the landfill levy from €75 per tonne to €80 per tonne are also among the proposals.

Mr Bruton has insisted people will be able to save money under the measures, in particular in relation to disposable cups.

“Initially people will take time to realise that by having their own ‘keep cup’ they will get a cheaper cup of coffee and they will do something that’s more sustainable for the environment. I think that penny will drop very quickly,” he said

“So this is being introduced not as a grab for money, but any money we get will be ploughed back into the environment. This is essentially about getting people to change behaviour in easy ways. These are relatively easy changes compared to some of the more infrastructural changes we also have to take.”

Mr Bruton also said the Taoiseach is “absolutely behind” the Government’s Climate Action Plan, following Mr Varadkar’s clarification of comments he made last week stating there were “benefits” to climate change.

Mr Varadkar said last week there were pluses and minuses to climate change and because of warmer winters it could lead to fewer deaths and lower heating bills. In the Dáil on Tuesday, the Taoiseach said that what he said was an observation, not a policy statement but “I can see how it was open to misinterpretation by those who may be pursuing a climate-sceptic agenda”.

Mr Bruton added: “In dealing with the adaption plan for health, that plan recognises of course climate change has big damages but some elements of it can give people better outcomes.

Meanwhile, environmental campaigners protested outside the Department of the Environment on Adelaide Road demanding action by the Minister on plastic waste.

More than 30 members of Friends of the Earth and the Sick of Plastic campaign dumped plastic litter (which was later cleaned up by participants) outside the offices, calling for the introduction of a deposit return scheme.

Claudia Tormey, from the Sick of Plastic campaign said: “Currently there is no recycling infrastructure for on-the-go waste in Ireland. Every plastic bottle and aluminium can that goes into a public street bin is going to landfill or incineration. Perfectly good recyclable materials are going to waste.

“Recyclable plastic is a valuable material, used plastic bottles should be salvaged and turned into new products. But to do that, we need better infrastructure to collect and recycle waste.”

Ms Tormey said while she welcomed the proposed levies, the plans are not “ambitious enough”.

“The tax on the bag is only 3c, it’s not enough to discourage the use of plastic bags and it’s only one small thing. The environmental fund is currently not investing in recycling infrastructure.

“We want to see the Minister’s study that he said he was doing on deposit return and how it would work in Ireland and that’s what we’re calling [for] today.”