‘This alarms us,’ key Irish-Americans write to May, Varadkar on Brexit

Group, including five former US ambassadors, concerned Belfast Agreement could be jeapordised 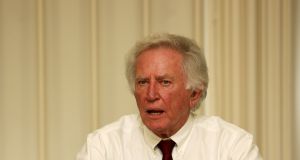 The letter, which has been signed by 40 senior figures including Gary Hart, comes ahead of Tanaiste Simon Coveney’s visit to Washington this week. File photograph: Brian Lawless/PA Wire

A group of prominent Irish-Americans, including former US Special Envoy to Northern Ireland Gary Hart and five former US ambassadors, have written to British prime minister Theresa May and Taoiseach Leo Varadkar expressing alarm the Belfast Agreement could be jeopardised because of Brexit.

The letter, which has been signed by 40 senior figures, comes ahead of Tanaiste Simon Coveney’s visit to Washington this week, where he is due to discuss Brexit with senior Irish-American figures on Capitol Hill. It reflects growing concern in US circles about the impact of Brexit on the border in Northern Ireland.

“The recent decision by the prime minister and the parliament to seek to re-open the withdrawal agreement and find an alternative to the backstop has put the Good Friday Agreement into play. This alarms us,” said former Congressman Jim Walsh, the co-chair of a committee set up to protect the Belfast Agreement, noting that the United States is a co-guarantor to the 1998 agreement.

“The backstop is the insurance policy that protects the Good Friday Agreement and the GFA cannot be used as a bargaining chip as the Brexit advocates search for an alternative arrangement.”

Highlighting the role played by Irish-America during the peace process, it notes that pro-Brexit advocates in London have set about diminishing the importance of the Belfast Agreement “almost to the point of dismissing it as irrelevant even though it is a binding international peace agreement.”

“This is an enormous mistake and only resurrects old animosities over the constitutional integrity of Northern Ireland and has already resurrected old stereotypes that do an injustice to all the people on the island of Ireland, North and South, who overwhelmingly supported the GFA in a referendum held in May of 1998,” the letter states.

Among the signatories to the letter include the former Maryland governor Martin O’Malley and former governor of Virginia Terry McAuliffe, the most recent ambassador to Ireland Kevin O’Malley, and senior officials who were centrally involved in the peace process during the Clinton presidency including Nancy Soderberg who was deputy national security advisor to President Clinton.

Bruce Morrison, who spearheaded the Morrison visa programme, said that peace “is not inevitable in Northern Ireland.” “A border defined by customs posts, checks points and infrastructure would reshape the economic, emotional and political landscape and resurrect the memories of the border when it was militarized during the Troubles,” he said.

Mr Coveney is due to attend a meeting at the US State Department on Wednesday, before attending a reception to mark 100 years of Dail Eireann in the US Capitol which will be hosted by the co-chairs of the Friends of Ireland caucus on Capitol Hill, Democratic Congressman Richard Neal and New York Republican, Peter King. Mr Coveney is also scheduled to hold several bilateral meetings with Irish-American figures in Congress.

Last week, Congressman Brendan Boyle introduced a resolution in Congress outlining opposition to the reintroduction of a hard border in Northern Ireland.

The resolution has now been referred to the House Committee on Foreign Affairs for consideration. It notes that the people of Northern Ireland and the Republic of Ireland voted overwhelmingly in favour of the Good Friday agreement in a referendum on May 22nd 1998. It also highlights the fact that the United States is one of the guarantors of the agreement.

The motion calls for the House of Representatives to express its opposition to the imposition of a hard border, “whether one that is strongly controlled by officials, police, or soldiers, or a physical barrier, between Northern Ireland and the Republic of Ireland.”

Members of the Irish-American caucus in the US Capital are watching events in London closely, and several have indicated that a return to a hard border in Ireland must be avoided at all costs.