Theresa May faces showdown with DUP over Brexit backstop plan 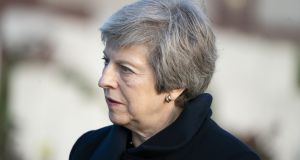 British prime minister Theresa May, whose cabinet is expected to meet early next week to consider a draft Brexit agreement including a compromise proposal on the Border backstop. Photograph: Jasper Juinen/Bloomberg

British prime minister Theresa May is set for a decisive showdown with her DUP allies over Brexit after DUP leader Arlene Foster rejected Mrs May’s proposed deal and accused the prime minister of breaking her promises to Northern Ireland.

Mrs Foster spurned Mrs May’s plans to agree a Northern Ireland-specific backstop as part of the proposed withdrawal treaty with the European Union, which were contained in a letter sent to the DUP this week.

“This letter suggests to us that there will be difference between Northern Ireland and the rest of the United Kingdom and therefore she’s breaking her promises,” Mrs Foster said last night.

She said she had spoken to members of the British cabinet who were also opposed to the proposed deal.

The DUP’s furious reaction to Mrs May’s proposals raises the prospect of a long-awaited showdown between the prime minister and an alliance of hard Brexiteers in her own party along with the DUP, on whose support she depends for her thin majority in the House of Commons.

But Downing Street rejected claims that Mrs May was preparing to “betray” the DUP by accepting a backstop that could leave Northern Ireland under different customs and single-market rules to the rest of the UK.

“The prime minister’s letter sets out her commitment, which she has been absolutely clear about on any number of occasions, to never accepting any circumstances in which the UK is divided into two customs territories. The government will not agree anything that brings about a hard border on the island of Ireland,” a Downing Street spokesman said.

Mrs May’s cabinet is expected to meet early next week to consider a draft withdrawal agreement including a compromise proposal on the backstop. If ministers back the deal and EU member states approve it, it could be signed off at a special EU summit in late November, Downing Street hopes.

The prime minister’s prospects of winning a parliamentary majority for a Brexit deal dimmed further on Friday when Jo Johnson resigned as transport minister and called for a second referendum.

Mr Johnson, whose brother Boris was one of the leaders of the Leave campaign in 2016, said Britain was “barrelling towards an incoherent Brexit” that would leave the country trapped in a subordinate relationship to the EU.

Mr Johnson said that, now that it was clear what leaving the EU actually looked like, British voters should be allowed to make the final choice about how to proceed.

In Dublin, Government sources were reluctant to be drawn into the row between Mrs May and the DUP. However, two senior figures expressed surprise that Mrs May’s letter to the DUP seemed to be committing to a Northern Ireland-specific backstop in the Withdrawal Treaty while simultaneously promising the DUP that it would never be used.

One source said that the Irish Government’s position was that either a UK-wide backstop (keeping the entire UK under EU customs rules) or a Northern Ireland-specific backstop was possible, but essential was a legally enforceable guarantee to maintain an open border between North and South unless and until it was achieved under a new trading agreement.

Without this, there could be no withdrawal treaty, the source said, as both Mr Varadkar and Minister for Foreign Affairs Simon Coveney, as well as senior EU leaders, had repeatedly made clear.