Report: economy ‘significantly reliant’ on critical route and would be hit by any deterioration in transit times and increased costs 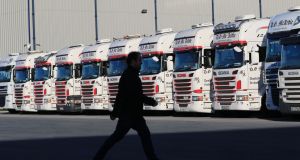 About 150,000 Irish lorries, higher goods vehicles (HGVs) and other vehicles use the landbridge every year. Photograph: Nick Bradshaw

The agrifood, seafood and automotive sectors will be “adversely affected” in particular by the impact of Brexit on the UK “landbridge,” the critical transit route linking Ireland and Europe, a new report finds.

In one of the most comprehensive studies ever published on the route, the Irish Maritime Development Office found that the landbridge is of “strategic importance for major sectors of the Irish economy”

The study concludes that the economy is “significantly reliant” on the landbridge route and certain sectors will be “adversely affected by any deterioration in transit times or increases in costs.”

The landbridge, which uses UK roads and ports to move goods, can bring produce to markets in less than 20 hours - up to half of the time it takes via a direct sea route for Irish roll-on, roll-off traffic or “ro-ro” lorries and up to two-thirds of the time it takes for load-on, load-off or “lo-lo” freight to reach Europe.

About 150,000 Irish lorries, heavy goods vehicles (HGVs) and other vehicles use the route every year, or 16 per cent of “ro-ro” traffic passing between Ireland and Britain. Almost 40 per cent of goods, approximately two million tonnes, exported from Ireland to continental Europe are transported over the landbridge.

“The actual value may be higher as there is evidence that the short transit times for the landbridge route are favoured for transporting higher value goods,” the report says.

The IMDO, a Government agency, recommends that, were Brexit to re-introduce border and customs controls, the Government should use technology and additional resources to minimise the burden on industry.

Ports, shipping firms and transport companies should be supported to prepare for Brexit and the Government should identify funding opportunities from EU programmes such as the Motorways of the Sea and Connecting Europe Facility to support the UK landbridge for Irish importers and exporters.

The Irish seafood sector is particularly exposed; some 26,000 tonnes of seafood, 11 per cent of all Irish produce exported by the sectorin 2017, was transported to EU markets via the landbridge.