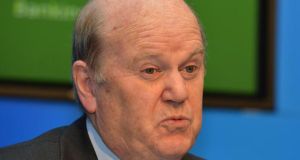 Minister for Finance Michael Noonan has described as “attractive” a proposal that would give Ireland’s multimillionaire tax exiles an extra two months a year in the State in exchange for a €15 million payment over 10 years.

A proposal from the Government-backed Forum on Philanthropy has suggested a scheme where so-called high net worth individuals who have chosen to live abroad can “buy” extra days in Ireland in exchange for investment in charities and other worthy projects.

Under current tax laws, a person is considered a non-resident for tax purposes if they spend no more than 182 days a year in Ireland.The scheme, discussed by the Oireachtas Finance Committee last week, would be targeted at super-rich individuals who have chosen to be non-resident. It is estimated there are some 400 tax exiles in this category.

It is proposed that by investing €5 million initially and €1 million each year for 10 years, they would accrue an extra 62 days a year in Ireland (bringing the total to 244 days) without being brought into the tax net. Under the scheme, the average cost for each extra day would work out at €36,500.

However, in a signal of the division the move might cause among the Coalition parties, Labour’s senior figure on the committee Kevin Humphreys said it “would turn my stomach to give some of these individuals extra days in Ireland”.

In a letter to the committee, Mr Noonan said the proposal is an attractive initiative, as it would focus on job creation.

He also pointed out it would give additional funding to charities, at a time when then two major philanthropic funds in Ireland, Atlantic Philanthropies and the One Foundation, are drawing their activities to a close, with the loss of €50 million in revenue a year.

Fine Gael’s Frank Flannery, who chairs the forum, argued to the committee that tax exiles could be asked and challenged to do more. He said that even if a tenth of the 400 exiles signed up it would be worth €200 million to the economy and if all signed up it would be worth €2 billion “with an ongoing income stream of €400 million each year with not one penny in displacement”.

Mr Humphreys, a TD for Dublin South-East, said “I think the citizens will be very annoyed that we give them extra days for €36,500 a day. For those guys it is not a lot of money.”

Psychiatric nurses to demand all money from hospital sale go to mental health service 07:12
Scheme aims to provide free legal services to those in need 06:50
Colleges must report annual bullying and sexual harassment figures 06:47
Majority of Covid-19 outbreaks in last week were in private houses 07:14
Science explains why your diet plan may not be working for you 06:00