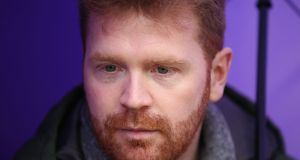 Social Democrats TD Gary Gannon: told the Taoiseach that Ireland had made international headlines last weekend and ‘not in a good way’. Photograph: Nick Bradshaw

People should not be deported to red zone countries or states where the level of Covid-19 is much worse than in Ireland, the Taoiseach has said as concerns were raised about two healthcare workers from Zimbabwe.

Micheál Martin expressed surprise in the Dáil that people were being deported because of the pandemic. Mr Martin was responding to Social Democrats TD Gary Gannon who highlighted the case of two healthcare workers.

He also said there are some 160 people in direct provision working in the healthcare system “with a sword of Damocles hanging over their heads”.

Mr Gannon told the Taoiseach that Ireland had made international headlines last weekend and “not in a good way” when CNN ran a story with the headline: “They saved lives during the pandemic - now they’re facing deportation from Ireland.”

The Dublin Central TD said the article referred to the two Zimbabweans working in the health service but facing deportation.

“Given the fact that we are going through a pandemic, that we said we are all in this together, that we all suffer together, isn’t now the time to draw a line under that and to stop the deportations of people who contribute to the healthcare system,” he said.

“It is very important that we intervene and ensure that people who have helped us through this time can stay here and become part of this Republic.”

The Taoiseach told him that “in the context of the pandemic, I am not quite sure how people can be deported, given the various restrictions and rules that govern it”.

Calling on Mr Gannon to give him details of the two cases, Mr Martin said he would asked that they be followed up, “because I do not believe that people should be deported in the context of Covid-19 to red zone areas or where the virus is in a much worse situation than is now the case here”.

Saying he did not know the individual cases, the Taoiseach said “Ireland does not deport too many people in any given year”.