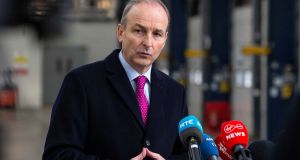 Taoiseach Micheál Martin has insisted that the data being used to inform Government decisions is not “guesswork” and that the next moves after Level 5 will be based on Irish information.

He urged people not to create “unnecessary rows” between the Oireachtas and the National Public Health Emergency Team (Nphet).

Nobody should question the good faith of those whose goal is to protect lives as he stressed that Ireland is second best in the EU at suppressing the virus, he added.

Mr Martin said that the Government was doing extra work in assessing data and doing data analytics. His own department was involved in this “and the data will inform the next steps.”.

He insisted that it was “not guesswork” and warned that some of the data “may not be palatable”.

He was responding to Independent TD Denis Naughten who said Irish Data should be used to inform Irish decisions. The Government should not rely on Nphet advice which he said was based on EU information.

Mr Naughten said the HSE had signed up to a Microsoft Dynamics CRM system on data, but he claimed the Health Protection Surveillance Centre was using data from a laboratory reporting system that was never designed for this pandemic. He said that many of the health-related outbreaks are not entered on it.

Describing Nphet as “unaccountable advisers”, the Roscommon-Galway TD claimed the Government was relying on an “educated guess, anecdotal evidence, partial data but sadly not all the hard cold facts”.

He said there were over 500 people working in contact tracing inputting large amounts of data.

“This is information your Government urgently needs to make the right decision on how we exit from the current lockdown.”

But they needed to know what the virus was doing to Ireland’s population which was different to other countries. They also needed to know who was interrogating the data on what is actually happening with Covid-19.

Calling for people not to engage in unnecessary rows he appealed to Mr Naughten not to question the good faith of those working to save lives.

He said his department was involved in the data processing and the data analytics which would be used in determination where the State went after Level 5.

“Informing our decisions is an approach that is based on analysis data,” Mr Martin said.

He stressed that there will be risks going into December and Christmas and “it’s how we mitigate those risks is the challenge”.

The Taoiseach also rejected claims of secrecy over preparations for the situation when the Level 5 restrictions ease.

He reiterated his comments before Level 5 restrictions were introduced that he wanted a return to Level 3 at the end of the six weeks.

Mr Martin was responding to Independent Limerick TD Richard O’Donoghue who accused the Government of failing to give hotels, restaurants and pubs sufficient time to prepare for re-opening in advance of Christmas and could get no guarantee of supply.

Mr O’Donoghue said that even children all around the world know that they had to give Santa advance notice of what they wanted.

“They sent their letters to Santa in advance” so that it “gives Santa Claus and Mrs Claus and the elves the due time so they can have their presents for them on Christmas day”.

Mr O’Donoghue warned that people would meet officially or unofficially and with hotels, restaurants and pubs there would be traceability.

The Taoiseach said he accepted the point about overall point about preparation and he said there would be “an announcement in time for various actors and sectors to prepare”.

He said “I made it very clear six weeks ago that there would be a six weeks application at Level 5” with the objective to get it back to Level 3 “and then see what we could do around that depending on where the numbers are. And my focus is to get the numbers down.”

Mr Martin warned that “as soon as you start talking about relaxation two weeks, three weeks out that focus goes out the window”.

He said that on the protection of livelihoods “if the virus gets to unmanageable levels the economic damage is far worse long-term”.