‘Scheduling difficulty’ cited by Government as reason for cancellation of trip 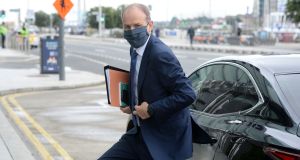 The planned visit by Taoiseach Micheál Martin to Belfast to meet First Minister Arlene Foster and Deputy First Minister Michelle O’Neill on Thursday has been postponed and is now expected to take place next week.

Government Buildings confirmed to The Irish Times earlier this week that the visit had been arranged for Thursday, but has now said that a scheduling difficulty has emerged in Belfast and the visit will not go ahead.

There was no detail given as to the nature of the problem, though Government sources said that problem was not in Dublin. It is hoped the visit will now take place next Thursday.

It is not clear if the postponement is related to the internal difficulties in the Northern Executive as a result of the Bobby Storey funeral last week, though Executive office business has been continuing regardless of the furore.

Daily joint press briefings have ceased, though this is understood to be over concerns about the public perception of Ms O’Neill giving out public health advice.

There is a meeting of the Executive scheduled for later on Thursday, which Stormont sources suggest would make the timing of a visit difficult, though there is understood to have been nervousness about a press conference which is likely to have seen the two leaders questioned closely about the controversy of the Storey funeral.

Senior Sinn Féin figures have been the subject of sustained criticism for the lack of social distancing apparent among the huge crowds which turned out for the funeral of the senior Republican in violation of rules introduced and promoted by the Executive.

Sinn Féin figures have denied any wrongdoing, though Ms O’Neill has repeatedly apologised to anyone who was hurt or offended by the funeral, though she has defended her attendance, as have other senior Sinn Féin figures including party leader Mary Lou McDonald.

On Tuesday evening the powersharing Assembly passed a motion urging Ms O’Neill to apologise for attending the funeral, something she has refused to do.

The motion passed without a vote on Tuesday evening, having been supported by the DUP, UUP, SDLP and Alliance, but it does not have any practical or legal effect.