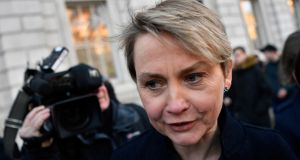 Labour MP Yvette Cooper: Her amendment could oblige the UK government to postpone Brexit until the end of the year if the prime minister fails to win MPs’ approval for a deal by the end of next month. Photograph: Neil Hall/EPA

MPs at Westminster could vote next week on an amendment calling for UK prime minister Theresa May’s Brexit deal to be approved on condition that a time limit is added to the Northern Ireland backstop.

Some cabinet ministers believe that if the Murrison amendment is approved, the prime minister would be in a strong position to argue in Brussels that a time limit on the backstop would enable her to win a majority for the Brexit deal at Westminster.

Dr Murrison’s amendment says the House of Commons should accept the withdrawal agreement “but insists on an expiry date to the backstop”. He tabled such an amendment ahead of last week’s vote on the Brexit deal but it was not selected for a vote by Speaker John Bercow.

Mrs May told MPs on Monday that she believes securing changes to the backstop represent the best chance of winning a parliamentary majority for the Brexit deal.

The European Union continues to insist that the withdrawal agreement, which includes the backstop, cannot be reopened. And Irish Ministers have argued consistently that a time limit would render the backstop ineffective as an insurance policy.

Tánaiste Simon Coveney and other senior EU politicians this week rejected a proposal from Poland’s foreign minister to add a five-year time limit to the backstop.

The amendments tabled so far to a Brexit motion next week include one from Labour’s Yvette Cooper which could oblige the government to postpone Brexit until the end of the year if the prime minister fails to win MPs’ approval for a deal by the end of next month.

Her amendment has broad cross-party support from MPs who are determined to stop Britain leaving the EU without a deal on March 29th.

Mrs May’s government is unwilling to accept the amendment or to offer a free vote on it, despite rumours that ministers are preparing to resign en masse if they are not allowed to vote for the amendment.

Former attorney general Dominic Grieve on Tuesday tabled an amendment that would allow MPs to take control of the parliamentary timetable on two days in February and four in March.

Mr Grieve said the aim of his amendment was to allow MPs to consider a number of options for how to proceed with Brexit before March 29th.

Pro-European politicians on Tuesday criticised the decision of Brexit advocate James Dyson to move his company’s headquarters from Britain to Singapore. Sir James has called for Britain to “walk away” from the EU, arguing that a no-deal Brexit would hurt Europe more than Britain.

“The shameless hypocrisy of leading Brexiters knows no bounds and today we learn that one of Brexit’s biggest backers, James Dyson, is moving his HQ from the UK to Singapore,” said Liberal Democrat MP Jo Stevens.

“Many leading Brexiters trumpeted Dyson as a model for how businesses in post-Brexit Britain could thrive, but the reality of Brexit is jobs being outsourced, companies leaving and investment drying up.”