European governments believe a deal is unlikely before mid-December

Speaking on the third day of EU summit meetings in Brussels, Taoiseach Leo Varadkar has said that a longer Brexit transition is not an alternative to a Border backstop, Video: EU Council 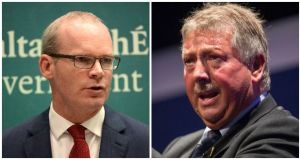 Tánaiste Simon Coveney has accused some advocates of Brexit of ignoring or denying the risk of renewed violence in Northern Ireland for political reasons.

He said it was wrong to dismiss as “Project Fear” the Government’s concerns about the potential for attacks on border checkpoints and infrastructure.

“There are some people who just don’t want to know because it doesn’t suit the political narrative that the Northern Ireland border issue is a really important issue for relationships on this island,” he said.

“It goes way beyond trade and cannot be dismissed as Project Fear or anything like it.”

“His latest use of a victim of the IRA who was killed when the republican terrorists blew up a Border post scrapes the bottom of the very deep barrel of threats, deception and rhetoric, which he has dipped into in order to persuade ignorant heads of EU states that the EU must insist in detaching Northern Ireland from the UK in any Brexit deal,” Mr Wilson said.

Mr Coveney said Mr Varadkar wanted to remind EU leaders at the summit on Wednesday why the issue of the Border is so “totemic” in Ireland.

His remarks came as British and EU negotiators came under pressure to find a solution to the issue of the backstop that would guarantee no return to a hard border. British prime minister Theresa May is no longer demanding that the backstop should have a specific time limit but she told more than 130 business leaders on Friday that it would “only be necessary for a temporary period” to act as a bridge to the future relationship between Britain and the EU.

Ms May has faced criticism from within her Conservative party after she said in Brussels that she was willing to consider extending the transition period, which is due to end in December 2020, by up to a year. Jacob Rees-Mogg said that he and his fellow Conservative Brexiteers in the European Research Group (ERG) would vote against any legislation to authorise further payments into the EU budget during an extended transition.

British officials were encouraged by a reported call by German chancellor Angela Merkel during the leaders’ dinner in Brussels for a more flexible approach on the backstop. But senior EU sources told The Irish Times that chief Brexit negotiator Michel Barnier would not be changing direction in the coming weeks.

With no summit scheduled for next month, sources in the European institutions in Brussels and member-state governments now believe that a Brexit deal is unlikely before mid-December.