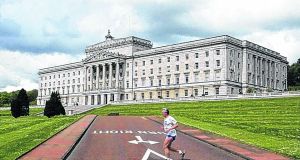 Assembly members have rejected a legal measure that would restrict abortion availability in Northern Ireland.


Assembly members have rejected a legal measure that would restrict abortion availability in Northern Ireland.

An amendment to the Criminal Justice Bill proposed jointly by the SDLP and DUP was defeated when it failed to secure the threshold of support needed among unionist and nationalist designations in the chamber. Instead of a simple majority, clear majorities on both sides of the house were needed.

This followed the bringing of a petition of concern by Sinn Féin – a measure to ensure controversial proposals receive the assent of both unionist and nationalist majorities. Some 44 unionist members, nearly 90 per cent of them, supported the measure. But only nine nationalists, or just over 25 per cent, voted “aye”, and the motion fell. The amendment, put down by SDLP justice spokesman Alban Maginness and the DUP chairman of the Stormont justice committee Paul Givan, sought to limit the already strictly controlled provision of abortion to the National Health Service (NHS).


Marie Stopes clinic
This means providers such as the Marie Stopes private clinic, which opened in Belfast last year, could not offer abortion services even within the North’s nine-week limit.

The vote followed an impassioned debate in which the Speaker, Willie Hay, had to repeatedly intervene to restore order.

Sinn Féin repeatedly insisted it was not seeking extension of the British 1967 Act nor easier access to abortion but this was rejected by a series of SDLP and unionist members.