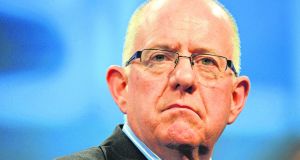 Minister for Justice Charlie Flanagan: has committed to reviewing all aspects of sexual assault cases in the wake of the Belfast rape trial. Photograph: Alan Betson

The Government will commission a new report into the prevalence of sexual abuse and violence against women, which was last conducted 15 years ago.

An interdepartmental group, which had been tasked with examining if a Sexual Abuse and Violence in Ireland (Savi) report was necessary, is expected shortly to report to Minister for Justice Charlie Flanagan.

The Irish Times understands the group recommends the study should be conducted and will provide a roadmap at a meeting with the Minister over the coming days.

There has been no such examination since 2002, despite advocacy groups insisting one was necessary to assess the scale of sexual crimes against women. The report is expected to cost in the region of €1 million.

As reported by The Irish Times on Monday, Mr Flanagan has committed to reviewing all aspects of sexual assault cases in the wake of the Belfast rape trial.

We’re not in any way trying to reduce the rights of an accused person in a serious criminal trial, all we’re saying is there are other people in the court, there are victims in the court

A series of rallies have taken place across the country in light of the acquittal of Ireland and Ulster rugby players Paddy Jackson and Stuart Olding last week. Criticisms have been made of the criminal justice system in both Northern Ireland and the Republic.

In response, Mr Flanagan has committed to assessing whether complainants in rape trials here should be allowed legal representation.

Currently, rape victims act as witnesses in the State’s prosecution but are not entitled to their own legal protection.

Other aspects of the review will include how cases can be progressed more quickly and whether gardaí should receive additional training in dealing with allegations of sexual crime.

Mr Flanagan said it was his belief that any reforms in the Republic should be considered alongside those in Northern Ireland.

The Minister told The Irish Times: “However, there is no executive in Northern Ireland and I have no counterpart to compare notes with and to address these pressing issues.”

The proposals for a review of all aspects of rape cases by the Minister for Justice were broadly welcomed by advocacy groups representing rape victims.

Chief executive of the Dublin Rape Crisis Centre Noeline Blackwell said the complainant in rape cases can often feel isolated during the trial.

While the accused is represented, the complainant is often on their own with no experience of the court system or of being cross-examined, Ms Blackwell added.

The DRCC chief executive stressed: “We’re not in any way trying to reduce the rights of an accused person in a serious criminal trial, all we’re saying is there are other people in the court, there are victims in the court, their rights also have to be respected, now more than ever.”

The review was also welcomed by the National Women’s Council, who insisted the current system did not support victims as well as it should.

Dr Cliona Loughnane, the group’s health co-ordinator said it is essential the experiences of victims were placed at the centre of the legal process.