Navy, Air Corps and locals on standby to reach taoiseach in event of emergency on Inishvickillane, which had no telephone contact with mainland 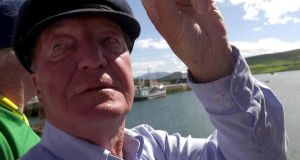 An elaborate plan involving the Irish Navy and the Air Corps was put in place for urgent contact with taoiseach Charlie Haughey when he holidayed with his family on a private island off the coast of Kerry each year.

The Taoiseach owned Inishvickillane, one of the Blasket islands in west Kerry. It had no telephone contact with the mainland, nor any electricity. The Haugheys would spend part of August based on the island, and would also go for multi-day trips on the family yacht, Celtic Mist.

Documents from 1989 released by the Department of the Taoiseach under the 30-year rule disclose detailed contingency plans for contacting Haughey in the event of an emergency, or for urgent State business.

At least one of the Irish Navy ships – LE Aoife, LE Eithne, and LE Deirdre – would be patrolling in southern, or south-western, waters during the time, within relative proximity of the island.

A note states that Naval Service ships would be carrying out gunnery exercises on the south coast during August.

“The Taoiseach may wish to join them, informally, if he so wishes,” states the memo.

It is known that Haughey invited boarding crews from Navy ships to visit the island from time to time during his time as taoiseach.

The document also stated that “two west German navy corvettes may be sighted” near Inishvickillane and that the Asgard training ship would also be sighted on passage from Cork to Galway.

If a helicopter was required, the note stated, the “Air Corps will have a Dauphine helicopter available at three hours notice from Baldonnel”.

There was also an arrangement to deploy an Irish Helicopters aircraft from Cork Airport if necessary.

The document also lists more than 50 phone numbers from the town of Dingle and from the Corca Dhuibhne Gaeltacht to help locate Haughey when he visited the mainland. including Páidí Ó Sé’s “new pub”, Krugers Bar, the hotels in Ballyferriter, Ballydavid and Ashe’s pub and the Sceilig Hotel in Dingle, as well as Garvey’s Supermarket and local senator Tom Fitzgerald.

The numbers of all the lifeguard stations along the south-west coast are listed, including Valentia and Baltimore, as are the numbers of the inhabited lighthouses, including Téaracht Lighthouse. These were presumably included to allow fast contact with Haughey when he was sailing on the Celtic Mist, or if the yacht got into trouble (Haughey and his sons had to be rescued from the yacht in the early 1980s when it got caught in a storm off the west Cork coast).

Mobile phones were not commonplace at the time. The only mobile number that is listed was the car phone (with an 088 prefix) in Haughey’s official car, which was driven by members of An Garda Síochána.

Haughey also insisted on knowing where other ministers were on holidays. There is a list of their holiday destinations. Most stayed in Ireland but then minister for energy Ray Burke went to Tirol in Austria on a walking holiday and environment minister Pádraig Flynn went to Paphos in Greece for a fortnight.

While there were no major incidents in 1989, there was one in August 1982 when a murder suspect Malcolm Macarthur was arrested in the home of the attorney general Patrick Connolly.

Senior officials had tremendous difficulty in contacting Haughey, who was staying on his island. When they finally made contact, it was on a bad line, and he allowed Connolly to proceed on a planned holiday to the US. In a gathering political scandal, that decision turned out to be a mistake.

Haughey was forced to hastily contradict his decision and order Connolly back from the US. He also had to cut short his holiday and return to Dublin to deal with the crisis. It was at the press conference that he uttered the adjectives – “grotesque”, “unprecedented”, “bizarre” and “unbelievable” – that formed the acronym GUBU. It was later used by his detractors to describe his style of politics.