Stormont deal should include date for minimum alcohol pricing - Varadkar 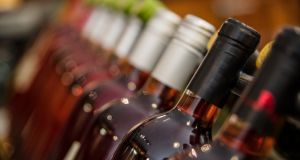 “If people are crossing the Border to buy cheap alcohol, this measure will not work economically or in public health terms,” Leo Varadkar said.

Any agreement in the talks to get Stormont up and running again should include a date for the introduction of minimum unit pricing on alcohol in Northern Ireland, the Taoiseach has told the Dáil.

Leo Varadkar said he did not want to encourage cross-border buying of alcohol by introducing minimum unit pricing in the State, without a similar measure in the North.

“If people are crossing the Border to buy cheap alcohol, this measure will not work economically or in public health terms,” he said.

The 2018 Public Health (Alcohol) Act aims to cut the sale of low-cost alcohol and includes provision for minimum unit pricing, a base price for alcohol below which no off-licence operator including supermarkets and petrol stations, will be allowed to sell drink.

The measure has not yet been implemented however because Stormont has been in abeyance for almost three years.

Mr Varadkar said the State and the North could agree to implement minimum unit pricing on the same date.

But he said “we cannot wait forever. If it does not prove possible to adopt the approach I have set out, we may need to go ahead with the introduction of minimum unit pricing unilaterally. We would have to bear in mind the consequences of such a decision.”

He was responding to Labour leader Brendan Howlin who expressed concern that a year after the legislation had been enacted elements of it had not been implemented.

“Two of the categories of people on whom it would have an impact are young people involved in the binge drinking of cheap alcohol and those who are addicted to consuming high volumes of spirits.”

Pointing to the Act’s provisions he said “minimum price per gram of alcohol would be €0.10. He said that “as half a litre of strong beer with an alcohol strength by volume of 5 per cent contains 20 grams of alcohol, it should have a minimum price of €1.98”.

“It would not have an impact on premium brands, craft beers or the average bottle of wine,” he added.