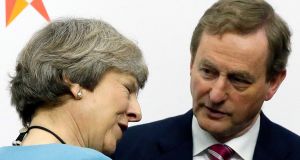 A “special deal” between the Republic of Ireland and Northern Ireland as the UK heads towards Brexit is not legally possible, legal experts have said.

The House of Commons voted last week to give British prime minister Theresa May the power to trigger article 50 of the Lisbon Treaty and set in motion the chain of events that will lead to the UK’s exit from the EU.

Taoiseach Enda Kenny has expressed confidence that the Common Travel Area between Britain and Ireland will survive unchanged after Brexit but warned of “very negative consequences” if there was a return to a hard Border with Northern Ireland.

However, EU customs and trade lawyers Michael Lux and Eric Pickett wrote an opinion piece in the Irish Examiner on Monday, which said special EU customs rules for the Border between the Republic and Northern Ireland were “unlikely”.

“Irish traders will have to declare to customs goods to be exported to, or to be imported from, Northern Ireland. In order to ensure that the customs, VAT and excise rules are complied with, Irish Customs will perform risk-based and random checks of private persons and lorries crossing the Border from the North,” the lawyers wrote.

“This may lead to queues and delays. It can be expected that the UK will have comparable rules, as it will also want to protect its financial interests.

“Manufacturers will have to reconsider whether it is still economically feasible to move goods for processing several times over the border (eg using milk from Northern Ireland in order to produce yoghurt in Ireland and re-exporting the yoghurt).”

They said current trade flows would change and “private persons” would also need to adjust their shopping habits.

“(They) will consider on the one hand whether they want to be subjected to occasional customs controls (risking to be fined if they have exceeded the duty-free threshold), and, on the other hand, whether buying goods in Northern Ireland will be more favourable, due to different prices and duties, as well as currency fluctuations. People in Northern Ireland will make the same considerations when reflecting on whether to shop in Ireland.”

Mr Lux told the committee Ms May’s promises of a frictionless Border were “nice words” but custom controls were unavoidable if the UK leaves the EU customs unions after Brexit.

In the analysis published on Monday, the two lawyers said the White Paper announced the UK aimed at concluding a “new comprehensive, bold and ambitious free trade agreement” with the EU.

“This could be misunderstood in the sense that trade between Ireland and Northern Ireland would be ‘free’,” they wrote.

“Unfortunately, this is not true. A free trade agreement only means that goods made entirely or substantially in the partner country are free from import duty.”

They said the main goal now was to ensure the customs procedures and formalities would be as “seamless and frictionless” as possible for people and businesses.

“When the UK exits the customs union of the EU, the border between Ireland and Northern Ireland will become an external customs Border,” they wrote.

“Private persons carrying goods bought on the other side of the Border and commercial traffic which had passed the Border freely under the rules of the single market will then have to comply with the customs procedures applicable in Ireland or the UK.”

They said in Ireland the customs legislation of the EU would apply to movements of goods between the Republic and Northern Ireland.

“The EU rules on VAT and excise duties (eg on alcohol and tobacco) on importation will also apply when goods are brought from Northern Ireland to Ireland.

This means that it will not be possible “to see the trade and everyday movements we have seen up to now”.

“Travellers can import goods from Northern Ireland duty and tax free only up to a certain amount (€300, with limitations for alcohol and tobacco) and will have to declare goods with a value above the threshold when entering Ireland.”

Irish officials have held several meetings with the European Commission’s Brexit task force to discuss issues such as the Common Travel Area and the customs union.

Officials on both sides have said there was a broad acceptance among other EU member states that the legacy of the Belfast Agreement should not be undermined by Brexit.