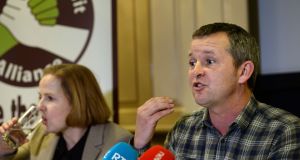 The Solidarity-People Before Profit Alliance has categorically ruled out any coalition agreement or pact with Sinn Féin in the run-up to the next election.

Solidarity TD Ruth Coppinger said on Wednesday that Sinn Féin’s “move to the right” since the general election last year had removed any possibility of an agreement between the parties.

Responding to a putative arrangement that was always remote in any instance, Ms Coppinger said: “Solidarity has been pretty clear. We ruled out any arrangement with Sinn Féin for the last election. It’s much clearer that they are willing to go into coalition with right-wing parties such as Fianna Fáil and Fine Gael.

“What we favour is that the left builds a majority in society.

We have seen movements led by [Bernie] Sanders or [Jeremy] Corbyn or [Jean-Luc] Mélenchon.”

Ms Coppinger was speaking at a press conference to mark a meeting of the alliance’s six TDs, and supporters, before the return of the Dáil next week.

The alliance also said that 100,000 social houses should be built over the next three to four years, with monies raised from corporation tax, from the Strategic Investment Fund, and elsewhere.

Richard Boyd Barrett of People Before Profit said that the Coffey Report on corporate tax had disclosed the “stunning fact” that profit made by corporations in Ireland had gone up, yet the proportion paid in tax was as low as 6, or even 5 per cent.

He said that if corporations actually paid the full 12.5 per cent rate, it would release €5 billion to spend on social housing.

He said that the Government should build 50,000 council houses next year and 20,000 for each of the following three years. He also said that thousands of vacant homes should be acquired compulsorily by the State.

Mr Boyd Barrett said too that a national emergency should be declared on housing, a move that would force the EU to relax its rules on borrowing.

“However, there’s a real problem because the EU fiscal rules are preventing us being able to spend that money on the huge social need that we have in this country,” he said.

He also described the Government decision for early repayment of the State’s bailout loan to the IMF as “criminal”.

“That €5 billion could build 50,000 social and affordable houses. It is criminal that that money was repaid to satisfy the so-called international markets,” he said.

The Alliance also called on the Government to repeal the eighth amendment banning abortion. It said the recommendations of the Citizens’ Assembly should be implemented, including making permissible abortion up to 12 weeks on request.

Ms Coppinger, a TD for Dublin West, said the Alliance will be “arguing for a left government. We need to build that in this country through the social movements that we’ve seen among young people but also among workers in general.”

She said despite the left being “small” in Ireland right now, the public’s support for both Fianna Fáil and Fine Gael has reduced.

“At one time they alternated power between them, now they need each other to rule because they’re under 50 per cent for the first time,” she said.

The Alliance said it is hopeful it will make at least two seat gains (Dublin Bay North and Limerick City) in the next general election.

They said they hoped to field candidates in most constituencies but the details of candidate selection between both parties had yet to be worked out.