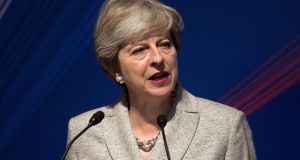 British prime minister Theresa May has contacted the Democratic Unionist Party and Sinn Féin to remind them of the importance of restoring government in Northern Ireland.

The North has been without government since powersharing at Stormont collapsed in January after the late deputy first minister Martin McGuinness resigned over the so-called “cash for ash” controversy.

There had been media speculation at the weekend that Ms May would fly from London to Northern Ireland this week to help broker a deal but Downing Street said no visit was planned.

On Wednesday, a Downing Street spokeswoman said that in separate phone calls with the party leaders Ms May had “made clear the importance of restoring a powersharing Executive to Northern Ireland as soon as possible and she recognised their continued leadership towards reaching agreement”.

Ms May offered Ms Foster and Ms O’Neill reassurance that Northern Secretary James Brokenshire would continue his effort to ensure a deal was reached.

“They discussed key outstanding issues that remain for both parties and the prime minister encouraged both leaders to come to an agreement soon in the interests of everyone in Northern Ireland,” the Downing Street statement said.

“The prime minister assured them both that the Northern Ireland Secretary would continue to work closely with the parties towards a successful outcome.”

Limited bilateral talks have taken place at Stormont this week between parties with Mr Brokenshire involved.

Ms O’Neill said she had made it clear to Ms May that “Sinn Féin is absolutely committed to seeing the institutions restored”.

“But for any new Executive to be sustainable and credible, it must be restored on the basis of the Good Friday Agreement,” she added. “That means addressing the outstanding issues of rights and respect such as language rights, marriage rights, the right to a coroner’s inquest and the implementation of previous agreements.”

Ms O’Neill said that as a “co-guarantor of the Good Friday Agreement” there was a responsibility on the British government to help ensure the issues were addressed.

Earlier this week, Social Democratic and Labour Party leader Colum Eastwood called for inclusive multiparty talks to resume on Monday. He said if the DUP and Sinn Féin cannot reach a compromise soon the British and Irish governments need to “step up and step in” with a plan for what a deal should include.

In a sign that the relationship between the DUP and Sinn Féin is perhaps improving, Ms Foster and Ms O’Neill have written a joint letter to the US government outlining concerns that a row between Bombardier and its rival Boeing over government subsidies could jeopardise jobs in Belfast.