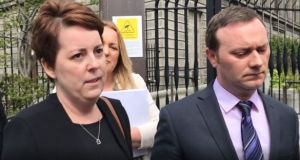 Ruth Morrissey and her husband Paul speaking outside the High Court after winning her case. File photograph: Michelle Devane/PA Wire

A statement issued by the solicitor of Ruth Morrissey, a terminally ill woman with cervical cancer, has accused the Minister for Health and his department of putting “politics ahead of common decency”.

The statement released on Sunday night “on behalf of Ruth & Paul Morrissey” by solicitor Cian O’Carroll said the first the Limerick woman knew the State was appealing the recent High Court judgment in her favour was when she read about it in The Sunday Business Post.

The State Claims Agency is appealing the judgment, but not the award of €2.1 in damages to Ms Morrissey and her husband. She was diagnosed with cervical cancer in 2014 and the High Court case related to smears taken under the CervicalCheck screening programme in 2009 and 2012.

The court heard she was not told until May last year that a 2014 review showed two smears were reported incorrectly.

Sunday night’s statement on behalf of Ms Morrissey said she was now “powerless” as a consequence of the appeal.

Since the High Court judgment six weeks ago, her health had deteriorated and she had spent the last while in Limerick’s Milford Hospice, only getting home in recent days.

She said she was now “no closer to a resolution of her case or knowing what provision is to be made for her family’s future”.

The agency has decided to appeal the judgment to the Supreme Court on behalf of the HSE in respect of a “number of important legal points that may have significant implications for the State and which were raised in the recent High Court decision”.

The agency went on to state that the appeal would relate to the findings of primary and vicarious liability and the definition of “absolute confidence”, and not to the award of damages. However, during the case, Mr O’Carroll said only the two laboratories involved, Quest and Medlab Laboratories, made submissions in relation to the issue of “absolute confidence” and the State had “completely ignored” it during the 40-day trial.

Mr O’Carroll said he had written to Minister for Health Simon Harris on Friday on behalf of Ms Morrissey asking him to assure her that her award would be paid to her family even if there was an appeal.

Speaking on RTÉ’s The Week in Politics programme, Mr Harris said he would like to find a mechanism to protect Ms Morrissey’s award from any appeal and that “an assurance can be provided that that award cannot be taken from her”.

However, senior legal sources have said this may be difficult as it was two laboratories who were paying damages, not the State or HSE.

They said Mr Harris could possibly indemnify Ms Morrissey and agree her award be paid regardless of the appeal’s outcome or the three parties could say they were appealing only the absolute confidence element of the case.

Mr Harris will bring the heads of a Bill or introductory stages to Cabinet on Monday to establish a tribunal to hear and determine claims arising from the CervicalCheck screening controversy, his spokeswoman said.

Women may still choose to go to court.