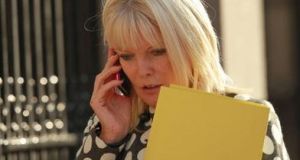 Mary Mitchell O’Connor: ‘Projects such as BusConnects are intended to improve the lives of residents, not to rip the heart out of their village, their community.’

In her submission to the National Transport Authority (NTA), which the Dún Laoghaire TD also circulated to her constituents in Shankill, Ms Mitchell O’Connor said: “Public transport is important but a route that notionally saves a few minutes in travel time is not worth sacrificing a community for, or destroying one of the finest urban villages [Shankill] of Dublin.”

In relation to the proposed Bray to city centre corridor, Ms Mitchell O’Connor said she has “major issues” with the plan for the Shankill area, and urged the NTA to “rethink the plans and seek an alternative routing via the M11 for this corridor”.

“Over the past months I have spoken to and been contacted by hundreds of residents from Shankill, distraught at the proposals for the village. I share their fears and stand with them.”

The Minister of State said she could not “stand over” the proposed Bray to city centre corridor.

BusConnects aims to overhaul the current bus system in the Dublin region by creating 230km of dedicated bus lanes and 200km of cycle tracks along 16 of the busiest corridors, along with a redesign of the network. The plan, which promises to deliver journey time savings of up to 50 per cent on each corridor, is part of the Government’s Project 2040.

“That many of these would be ripped up to be replaced by a carriageway is nothing short of vandalism.”

The Fine Gael TD said her primary concerns were in relation to the removal of on-street parking, removal of trees and possible land acquisition, in particular part of the grounds at St Anne’s church in Shankill.

“In the case of the church, the loss of parking spaces will affect not just Mass-goers but also parents dropping their children to school during the week, and it will negatively impact elderly and young alike using St Anne’s community centre.”

A number of proposed corridors under the plans would run directly through Ms O’Connell’s constituency in Dublin Bay South.

Dublin North West TD Noel Rock told RTÉ’s Prime Time on Tuesday that he stood by his comments at a Fine Gael parliamentary party meeting that BusConnects was “a political landmine”.

Mr Rock said it was important that politicians and the NTA listen to people’s concerns. The transport body had demonstrated its “capacity to listen” in the past, in its decision not to use Na Fianna’s GAA club pitches as a tunnelling site for the MetroLink project.

The NTA said all submissions would be reviewed over the coming months, and a second round of public consultation on “detailed designs” would commence in the autumn.