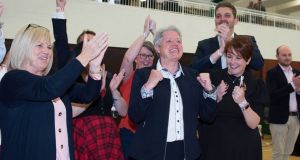 Theresa May and Jeremy Corbyn have said that losses suffered by their parties in local elections meant that voters wanted them to work together to pass a Brexit deal.

The Conservatives lost more than 1,100 seats in the worst result for any party in 20 years and Labour lost more than 100 as Liberal Democrats, Greens and Independents made big gains.

“I think there was a simple message from yesterday’s elections to both us and the Labour Party – just get on and deliver Brexit,” the British prime minister said.

The British government and Labour will resume negotiations next week aimed at agreeing a common position on Brexit that could allow the withdrawal agreement to win a majority in parliament. Mr Corbyn, the Labour leader, said the local election results added urgency to those negotiations and would put pressure on MPs to approve a deal.

“I think it means there’s a huge impetus on every MP, and they’ve all got that message, whether they themselves are leave or remain, or the people across the country, that an arrangement has to be made, a deal has to be done, parliament has to resolve this issue – I think that is very, very clear,” he said.

The local elections were confined to parts of England and to Northern Ireland, where counting will not be completed until Saturday. Alison Bennington, the DUP’s first openly gay candidate, was elected on the sixth count shortly after 5pm to the Glengormley urban area of Newtownabbey Borough Council.

In England, the Conservatives suffered heavy losses to the Liberal Democrats, who had their best result for a quarter of a century, and to Independents who more than doubled their number to more than 1,000 councillors. The Greens who, like the Liberal Democrats, favour a second Brexit referendum had their best ever result. The BBC’s projected national share of the vote put both the Conservatives and Labour at 28 per cent.