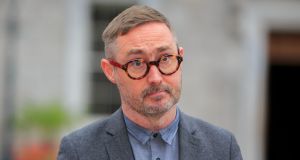 Sinn Féin’s Eoin O’Broin: said the party will support the Bill moving to the next stage in the Dáil. Photograph: Gareth Chaney/Collins

Sinn Féin have pledged to support the progress of new legislation which would let people who are terminally ill decide the timing of their own death.

The Dying with Dignity Bill is being put forward by People Before Profit’s Gino Kenny, a TD for Dublin Mid-West.

Speaking on Monday morning, Sinn Féin TD Eoin O’Broin said the party will support the Bill moving to the next stage in the Dáil when it comes up for debate.

“Our view is that we think we should allow the Bill to pass through second stage so that you can have that full and frank proper discussion in the committee before we decide how to proceed.”

He said it is a significant issue which merits a national debate.

“There are different views inside our party on it, but not having a debate, I don’t think, is not a solution for anybody.”

Mr Kenny said the Bill would give the legal and medical right to authorise voluntary assisted dying for people suffering from a terminal illness.

Similar legislation has come before the Houses of the Oireachtas, without success.

Labour Party leader Alan Kelly says he supports the Bill. Prominent Right-to-Die campaigner Tom Curran said that there were many freedoms in Ireland but it did not extend to the end of life.

The Government has been urged to allow its TDs a free vote on the legislation. The legislation has gone into the Dáil lottery system where private members Bills are chosen on a random basis for debate in the House.

It is therefore unclear when it will be debated. The legislation is also supported by cervical cancer campaigner Vicky Phelan. Speaking about the Bill, Mr Kenny said “compassion, empathy and humanity should be at the heart of this debate” where the most important voice “is that of the individual who has been diagnosed with a terminal illness”.

He added: “Assisted dying is not about ending life, but about ending suffering when a person no longer has the option of living. They have not made that decision. It has been taken out of their hands.”