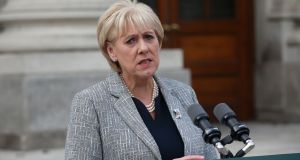 Heather Humphreys: “I do expect management at Aer Lingus to communicate fully with staff regarding this matter, and provide them with the necessary documentation”

Ms Humphreys said she knew of no other company having difficulty in addressing the issue for employees on reduced working times.

Many thousands of companies had moved on to the employment wage subsidy scheme (EWSS) without any impact on their employees, she said.

“So it’s difficult, therefore, to understand how an organisation the size on Aer Lingus, with a dedicated HR department, has had problems in interpreting the criteria around EWSS and short-term work when many small businesses throughout the country have had no such issue.”

The Minister said the company had on Thursday confirmed that any outstanding documentation required to finalise an application for jobseekers support would be provided by Aer Lingus to their employees as a matter of urgency.

Ms Humphreys acknowledged the “huge stress” employees were under, and she shared the frustration of Opposition TDs as to why the company had not provided the confirmation before of days worked.

“I do expect management at Aer Lingus to communicate fully with staff regarding this matter, and provide them with the necessary documentation.”

The Minister pledged that her officials would prioritise Aer Lingus applications, and they would be backdated to the start of September when the new EWSS started.

Ms Humphreys was responding to Sinn Féin TDs who raised the plight of workers who could not access their social welfare entitlements because the company had failed to supply documentation confirming the days they worked and the days they were not working.

Employees were put on two- and three-day weeks following the collapse of the aviation sector in the Covid-19 pandemic.

Sinn Féin enterprise spokeswoman Louise O’Reilly cited one case where an employee had received just €250 for two weeks’ work and could not pay the mortgage or other bills because Aer Lingus had refused to sign the necessary documentation.

She said Intreo offices had not received any clarity from Aer Lingus and their head of social protection on how to process any of the claims.

Roscommon-Galway TD Claire Kerrane said there had been “six months of workers not knowing their income from one week to another”.

Meath East TD Darren O’Rourke said the company told employees that it was receiving “conflicting messages from Revenue and Intreo”.

However, Ms Humphreys stressed that “my department has clarified to Aer Lingus on a number of occasions the details that are required”.

In a statement on Thursday night, Aer Lingus said it requested clarity from the Department of Employment and Social Protection (DEASP) on a number of key issues weeks in advance of the commencement of the Employee Wage Subsidy Scheme (EWSS) as to how the scheme would operate, and failed to receive that clarity .

“Aer Lingus then wrote directly to Minister Humphreys on 7th September in relation to these issues,” the spokeswoman said. “Whilst the Minister did not respond personally to the queries, Aer Lingus had constructive discussions with her Department during which the requested clarity was provided.”

She said Aer Lingus had acted “at all times in accordance with the guidance as provided by DEASP and the Revenue Commissioners”.

“We believe that the issues relating to the EWSS have now been resolved and an agreed process has been put in place with DEASP,” she said.