Sinn Féin TDs ‘harking back to the past’, says Unionist Senator 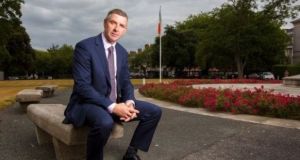 Unionist Senator Ian Marshall has expressed his disappointment about incidents involving Sinn Féin TDs “harking back to the past” and said there would be “complete uproar” if anyone sang about the parachute regiment or Bloody Sunday or chanted “no surrender”.

Mr Marshall said he was very disappointed that the focus in Northern Ireland on the election was on the “Up the Ra” comments by Waterford TD David Cullinane and on rebel songs sung by Dublin North West TD Dessie Ellis at the count when he was elected.

The former president of the Ulster Farmers Union believed that “played into the hands of those people who said nothing has changed” in the Republic and undermined the efforts of senior members of Sinn Féin and loyalists to build bridges.

“I don’t think it’s reflective of where the political leadership in Sinn Féin is,” he said, adding that they were working really hard to move on.

The remarks and rebel songs “unnerved a few people” concerned about the fact that “some people are still dwelling on the past”.

He also expressed the view that “anybody who has a mandate and who’s democratically elected and has denounced violence is perfectly entitled to be in government”.

There were analogies with the North he said where people looked at what was going on in the south as hypocritical when politicians were criticised in the North and told to “get over it” and get back into the Assembly and Executive.

The Co Armagh man was elected to the Seanad in a byelection two years ago after being approached to run by Taoiseach Leo Varadkar and he topped the poll with the support of most Fine Gael, Sinn Féin and Independents.

In the last couple of weeks the “red line over border polls became blurred and the focus was about housing, homelessness and healthcare”.

But in the North and in Britain the focus was on these incidents and not on the “appetite for change” being expressed by young voters “who never knew the past that went on and have no connection to that”.

He added: “If anyone started to sing loyalist songs and started chanting no surrender or started to sing songs about the parachute regiment or bloody Sunday there would be complete uproar.”

Mr Marshall, who is seeking a nomination to run again for the Seanad, said his greatest difficulty was that these incidents involved elected representatives.

“David Cullinane was born in 1974 in Waterford never lived through the troubles. And this triumphalism and ideology is certainly not helpful.

“People who lived through it look at this in horror, they want to move on.”

“If you’re trying to build bridges and re-assure people what everyone’s moved on, that undermines a lot of the good work that’ s being done. And that’s by people within his own party who are working really hard to try and move the conversation on.”

Mr Marshall acknowledged that it was only two incidents but he said when there had been “fairly benign reporting” of the election and “then you have a soundbite which is these two incidents then people (in the North) assume it’s far more widespread”.

The Senator urged to watch the film Lost Lives about those killed in the Troubles to be broadcast by the BBC on Sunday night and which he had had screened for TDs and Senators in Leinster House before Christmas.

“When you see the futility of it you certainly wouldn’t be supporting people singing those kinds of songs, because they’re not reflective of the new Ireland for anyone under 35 who never remembered that and certainly didn’t vote to support that.”