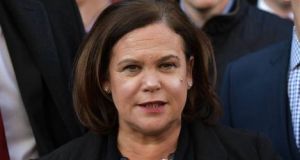 Mary Lou McDonald: “I would say to our unionist friends ‘be part of this conversation’.”

Sinn Féin leader Mary Lou McDonald has said there will be a united Ireland within 10 years, and sought to reassure unionists that they would “remain British” if Northern Ireland voted to leave the United Kingdom.

In a YouTube interview with the British journalist and left-wing campaigner Owen Jones, Ms McDonald said: “We’ll do it in the next decade. We’ll do it in this decade, actually. This is the decade of opportunity.”

She predicted: “We can have our referendum, we can win it, and win it well.”

She called on unionists to become involved in discussions on a united Ireland, saying that “we have a huge amount of preparatory work to do for an orderly constitutional transition”.

She urged unionists “not to equate the reunification project with threat or loss...it has to be about gain or additionality”.

“I would say to our unionist friends ‘be part of this conversation’. I respect the fact that unionists themselves can articulate best their needs, their ideas, their concerns around a reunified Ireland much better than I can as an Irish republican woman. I think we need to make space for that conversation...We need to acknowledge each other, we need to appreciate each other.”

She said that Irish reunification was not a Sinn Féin project . “This is a national project – and it belongs to everybody.”

“I think that’s wrong-headed, I don’t think that gives any comfort to anyone, including our unionist brothers and sisters, because I think it is self-evident the winds of change are blowing. There is no sense in sticking your head in the sand.”

She said the responsible thing was to plan for a united Ireland, and to have a citizens’ assembly to discuss the issue. “I would say it’s game-on now, let’s talk, let’s plan, let’s listen to each other.”

She said the threshold was “50 per cent plus one”, and “once that’s achieved constitutional change will happen, so let’s fashion that together”.

Ms McDonald said that the European project had “beyond question” lost its way, but that Brexit had put the question of Irish unity “front and centre”.

Irish unity, she said, was a “commonsense approach...the best plan for people who live on this island”.

3 Covid-19: Six more deaths and another 612 cases confirmed in the State