Sinn Féin has said that if elected to government it would deliver over 100,000 public homes on public land and introduce laws to enable the Central Bank to reduce mortgage interest rates. Video: Bryan O'Brien 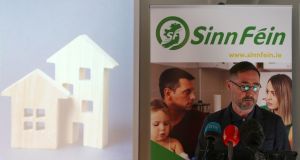 Sinn Féin housing spokesman Eoin Ó Broin said the party was committed to delivering what it says is the “largest public house building programme in the history of the State” if it was in government after the election. Photograph: Sam Boal/Rollingnews.ie

Sinn Féin has promised to reduce mortgage interest rates if they enter government through new legislation which would allow the Central Bank to tell the banks to cap the rates.

The party’s housing spokesman Eoin Ó Broin said there would be an “absolute expectation” that the banks would use the powers and reduce rates.

“It is really clear that if you leave the market to its own devices interest rates will be far too high for first-time buyers in particular, so you need that kind of action. If the market functioned normally you wouldn’t have to take that kind of action. Unless you give the Central Bank the power to cap those rates, the market will continue to determine the rates at a level which is not in the interest of homeowners.”

He said that if Sinn Féin is elected to government it would also set a deadline for ending homelessness, although he did not provide that date.

“The crucial thing about setting a date for anything is that you do it on the basis of what is going to work and I think a responsible minister will engage very quickly on taking office with local authorities and NGOs and voluntary sector to agree that date. It is not just about setting a date, it is about ensuring that you have the framework in place to achieve it.

“There will always be people who fall into homelessness, the crucial thing is to get them out of homelessness as quick as possible. I think you could announce that date within a very short period of time after taking up office.”

The party is also committing to what it says is the “largest public house building programme in the history of the State”. If the party is in the government it says it would deliver 100,000 public homes on public land. Some 60,000 of these would be social homes with 30,000 “genuinely affordable” homes and 10,000 affordable rental homes. He said that the party views an “affordable home” as a property which can be bought at or below €250,000 in Dublin.

Mr Ó Broin said that since Fine Gael launched its Rebuilding Ireland plan in 2016, the housing situation had deteriorated. He said both Fianna Fáil and Fine Gael had followed “the same set of bad policies”.

On the rental crisis, he said Sinn Féin would give renters back €1,500 in the form of a refundable tax credit alongside a three-year rent freeze. The party also says it will hold a referendum to enshrine the right to housing in the Constitution, and would bring in a defect redress scheme for owner of defective Celtic Tiger properties.

“This election isn’t just about the policies. It is also about who the public wants as the housing minister. Do they want Eoghan Murphy, whose stand-out achievements are records level of homelessness, sky high rents and house prices, or ever rising social housing needs?

“Do they want [Fianna Fáil TD] Darragh O’Brien who has facilitated Fine Gael’s failed housing policy by repeatedly abstaining on budgets and motions of no confidence?