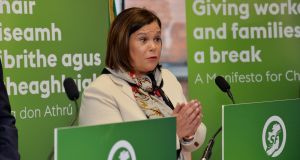 Sinn Féin’s general election manifesto sets it firmly apart from Fine Gael and Fianna Fáil with radical proposals to add significantly to planned government spending, funded by big hikes in taxes on business and the better-off.

It’s a “go big” plan designed to be radical – and so the scale of changes to tax and spending are striking and the challenges of implementation would be big.

It proposals to raise government spending by €22 billion over the next five years add up to around twice the amount of unallocated resources which the Department of Finance says may be available on its growth and budget assumptions and are way above what the two main parties have proposed.

How does Sinn Féin propose to pay for this? First, by big increases in tax on businesses and the better-off. Second, by targetnig a smaller budget surplus– under its plans the general government balance would be in surplus to the tune of €3.4 billion by 2025, compared to €5.7 billion on existing government targets. And third, it proposes to use the €4 billion which the State will get back from NAMA in the next couple of years as a once-off boost to investment spending, rather than paying down the national debt.

The plan carries the same health warnings as those of other parties – a hit to growth could make it unaffordable and the cost of dealing withinflation and the ageing population may be greater than estimated.

More change brings some bigger risks, too. Its strategy would leave less leeway in the public finances if trouble hit than the plans of Fianna Fáil and Fine Gael – Sinn Féin’s argument is that action via higher spending can’t be delayed, given the health and housing crises.

The speed and scale of the increase in public spending would also bring challenges. The party argues that this could lead to a step-change in the provision public services to citizens. But could the State system really absorb this level of higher spending – and what impact would it have on an economy already close to full capacity?

On tax, businesses are targeted for significantly higher revenue. The party promises to end the current arrangement where banks can write off losses to avoid paying corporation tax. This would be popular, but as the State owns big bank stakes there may be costs here, too.

Its biggest revenue measure is to raise €722 million by taxing some of the profits coming from intellectual property (IP) assets brought to Ireland between 2015 and 2017 by a small number of big multinationals.

New rules opened up some of the profits on tax from IP moved here from 2018 onwards – and the party proposes to introduce the same for the assets moved here before that. This is a tricky area for policy as multinationals could move their IP easily, potentially removing the profit and the resulting tax – already a risk for the years ahead.

On income tax, Sinn Féin’s proposes to abolish the Universal Social Charge on the first €30,000 of earnings – which would benefit all employees but give the biggest proportional gain to the lower paid.

It also proposes to abolish the local property tax – despite residential property being the biggest source of wealth, it says it is unfair. Separately the party proposes a wealth tax on assets worth more than €1 million.

Sinn Féin’s tax raising measures would represent a big hit on high income earners. It proposes a 5 per cent levy on individual incomes above €140,000, a tapering of tax credits on earnings above €100,000 and a big hit to pensions of the better-off. Combined with the USC cut on lower earnings this does put even more of the tax burden on a small group of higher earners. Together with a hike in employers’ PRSI it will raise warnings from business in relation to its impact on investment.

The party will hope its strategy is radical enough to open up clear ground between it and the other parties . Much will appeal to its traditional base, but what traction it gets with the undecided middle ground will be interesting to watch.