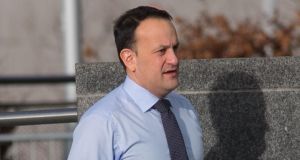 Sinn Féin leader Mary Lou McDonald has written to Taoiseach Micheál Martin seeking a response after Department of Health emails showed officials had concerns about releasing a GP contract document, which was given by Leo Varadkar to Dr Maitiú Ó Tuathail.

Sinn Féin finance spokesman Pearse Doherty is likely to raise the issue in the Dáil today, when Mr Varadkar is due to take leaders’ questions.

The Irish Times yesterday reported that emails between senior officials in the Department of Health showed a reluctance to supply even their own minister with a copy of the document because it was not finalised and because of concerns about it being published prematurely.

In April 2019 when he was taoiseach, Mr Varadkar supplied the draft GP contract to Dr Ó Tuathail, who was head of a GP organisation set up to rival the Irish Medical Organisation (IMO) which was negotiating with the government. He apologised for the leak in the Dáil last November.

In her letter to the Taoiseach, Ms McDonald asserts that the new information contained in the department’s emails “further undermines the Tánaiste’s defence that the leaking of the contract was part of a government strategy and that the document was more or less in the public domain when he passed it to Dr Ó Tuathail”.

“It is clear throughout the documents provided to us that the agreement had not been concluded at this time and the negotiations were ongoing. In fact, the first complete version of the document was not concluded until the 24th April, when it was sent to the IMO for consideration. It was not published until mid-May,” she says.

“I believe that these are matters of considerable public interest and disquiet and it is essential that you inform the Dáil as to how you intend to deal with the matter,” Ms McDonald says.

The Sinn Féin leader also suggests that then minister for health Simon Harris “misled the Dáil” when he said that his only inquiries about the document were in order to publish it. Mr Harris is expected to strongly contest this however. While his adviser did request a copy of the document, she also made clear that he wished to publish the document.

In a statement last night, Mr Doherty said: “It is no wonder that these documents were withheld from Sinn Féin for two months.

“They leave the Tánaiste’s defence of leaking this confidential contract in tatters. It is clear that the GP contract was subject to serious negotiations and it was not in the public domain. It was so confidential that the Minster couldn’t get a copy,” he said.

“The Tánaiste needs to explain why there is no record of contact between his office and the Department of Health and he needs to set out how he got this document. We have not heard a full account and that must be forthcoming.”

The Labour Party has also called for Mr Varadkar to answer questions on the issue, with frontbencher Aodhán Ó Ríordáin saying that his account in the Dáil last November had been undermined by the publication of the emails.

“It is concerning that the Tánaiste’s account of his actions and motivations is not matched by these documents. The Tánaiste now has a responsibility to answer questions in the Dáil as to how he can still stand over his earlier statement and how the Dáil can continue to have confidence in him,” Mr Ó Ríordáin said.