While it may be unpalatable for some, the party has shown it can get the job done

The lifespan of some political manifesto falls somewhere between a sickly green-fly and a bar mat. Can politicians believe in it? And why do its promises disintegrate so quickly? 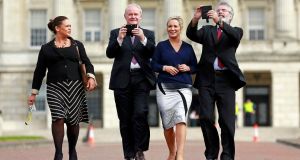 Whatever Fine Gael, Fianna Fáil, Labour and some of the southern commentariat might say, there is a fairly broad consensus in Northern Ireland, based on some 17 years of experience, that Sinn Féin can do government.

And if Sinn Féin does end up in a Dáil coalition when the votes are counted after February 26th, the expectation on this side of the Border would be that they would do government in the South too.

After all, if a republican and avowedly socialist party – although there is less emphasis on the socialist these days – could share power with a unionist and proudly right-wing DUP, why couldn’t it share power with Fianna Fáil and/or Labour and an amalgam of Independents and micro-parties?

“Sinn Féin Ministers have committed themselves to abide by the legal, bureaucratic and political constraints that surround their office as government Ministers, even to the point, for example, of their departmental civil servants [rather than them personally as Ministers] making recommendations for [British] public honours,” he says.

“Sinn Féin Ministers have been squeaky clean, even more than their DUP counterparts, when it comes to propriety,” says Prof Brewer, who heads the Senator George J Mitchell Institute for Global Peace, Security and Justice at Queen’s.

But Sinn Féin in Government Buildings would be different and unsettling for some. Having Gerry Adams, Mary Lou McDonald and Pearse Doherty fronting departments might take some getting used to. Then again, it would be nothing compared to the sharp intake of unionist breath that occurred when in 1999 former IRA commander Martin McGuinness was put in charge of their children’s education.

Trade unionists, academics, and business and farmers’ representatives contacted for this article were generally of the view that Sinn Féin Ministers in the North are as good or as bad as any minister in the South.

Or as one keen observer of the party in Stormont and local government in Northern Ireland put it: “Sinn Féin have been remarkably practical. They realise that they have to make concessions and deals just to get the day in.

“They don’t act like screaming Trots because they know that is not how business gets done. They don’t like to be seen as the political establishment but that is what they are.”

Sinn Féin has been in the Northern Executive since 1999 when McGuinness took over Education and Bairbre de Brún took on Health. After previous years of stop-start government, Sinn Féin, with the DUP, has been the dominant party in the Executive since 2007. The party held four of the 13 full ministries, with the DUP in charge of five, and each having a junior ministry.

Despite the past two years of dysfunctional Stormont politics that was rescued through the November Fresh Start agreement, Sinn Féin has operated the Northern Executive as effectively as the other four parties with which it shares power. Departmental work continued alongside the political crisis.

And notwithstanding the political problems of the past two years, Deputy First Minister McGuinness at least managed to prevent Stormont from collapsing. He worked well with arch pragmatist Peter Robinson and so far his relationship with his successor, Arlene Foster, has been positive, although IRA attacks from the past that wounded her father and could have killed her keep intruding. It will be gloves off when the campaign for the May Assembly elections kicks in but already McGuinness and Foster are planning a programme for government for the next Northern executive.

John O’Dowd, who is in charge of the Education portfolio, is the most impressive of the regular Sinn Féin Ministers. Northern Ireland for political, religious, parental and philosophical reasons does not have shared education but it has a decent education system. O’Dowd is on top of his brief and engages easily and forthrightly with the various education sectors - primary, second-level, trade unions and Catholic and state school heads.

Minister of Agriculture and Rural Development Michelle O’Neill is popular with farmers, many of them from unionist backgrounds, and has a strong relationship with the Ulster Farmers’ Union.

It has been trickier for Minister for Culture, Arts and Leisure Carál Ní Chuilín who faces complaints about lack of funding from arts and sporting bodies. She has so far also failed to get the huge Casement Park development off the ground. But these problems are similar to those Ministers in the South regularly face.

Prof Brewer believes that Sinn Féin is wedded to dealing with “disagreement non-violently and solely by political means”.

“Sinn Féin government Ministers have not given up on their political first preference of a reunited Ireland but have nonetheless effectively discharged their duties as Ministers to make Northern Ireland’s power-sharing deal work,” he says.

Inevitably, though, the past hangs over Sinn Féin. Perhaps not for a generation or so will it be viewed as a normal political party on either side of the Border because of its links with the IRA.

Take, for example, Ní Chuilín, a former IRA prisoner. A harsh spotlight fell on her in 2012 through her appointment of Mary McArdle as one of her special advisers.

McArdle was involved in the murder of Mary Travers who was shot dead by the IRA while leaving Mass with her father Tom, a Belfast judge, and mother Joan, in south Belfast in 1984.

There is always the possibility that a similar situation could arise if Sinn Féin ministers and their “spads” (special political advisers) were to end up in Government departments in Dublin. While Ann’s Law annoyed and discommoded Sinn Féin, it generally has been able to brazen out similar attempts to embarrass or upset the party over its IRA connections.

Issues such as the murder of Jean McConville and others of the Disappeared and IRA atrocities such as Kingsmill, Enniskillen and Teebane are regularly aired in the Assembly chamber by unionist MLAs but it doesn’t seem to cause Sinn Féin any damage or undermine the work of Sinn Féin Ministers. Again, why should the situation be any different in Leinster House?

But there is no doubt that the horrors of the past will come up again and again in both Stormont and the Dáil. An immediate challenge for Sinn Féin in the Republic is the publicity surrounding “good republican” Thomas “Slab” Murphy, who will be sentenced for tax evasion on polling day.

The party is already under pressure over its attitude to the Special Criminal Court. Indeed these two matters could damage the party, particularly among middle-class voters.

But again, based on its Stormont experience, Sinn Féin’s neck would be hard enough and its skin thick enough to deal with such political assaults if it were in government. That’s what it has done in Northern Ireland.

Prof Brewer says part of Sinn Féin’s difficulty in this regard is that the “war generation still largely occupies government positions in Northern Ireland, although many councillors and MLA candidates are younger, and lack any baggage from the past.

“This tends to mean that whatever they say or do as government Ministers is approached through allegations of their responsibility for the past,” says Prof Brewer.

“Of course, this is Sinn Féin’s problem in the South too, despite the fact that very largely Sinn Féin have moved on from the war generation in the Irish Republic.

“Political opponents use legacy issues in the Irish election in much the same way they do in the North. It will be a measure of how politically mature the Irish electorate is to see if they can be persuaded by Sinn Féin of its commitment to a different sort of future.”

The past would cause it problems but based on its Stormont experience Sinn Féin would deal with them through brass-neck politics.

Engaging in populist politics could quickly lead to coalition deadlock but a Sinn Féin desire to be in office on both sides of the Border in 2016 and beyond might bring forth a more pragmatic Sinn Féin approach to government in the Republic.

Finally, there is the issue of personality. It is frequently commented upon how McGuinness’s easy and cordial nature has helped resolve many a tricky situation at Stormont. There is a widespread conviction in Northern Ireland that had Adams rather than McGuinness taken on the deputy first minister, role the executive would not have run nearly as smoothly.

Ultimately, any analysis of the party’s fitness for government may prove academic. But when all the votes are counted former commitments could be discarded and the lure of power could prompt the other parties to come courting Sinn Féin.