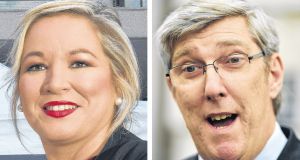 It has been dubbed the political contest that never was. The announcement that John O’Dowd would stand against Michelle O’Neill for the position of vice-president, or deputy leader, of Sinn Féin came in a single tweet at the end of August.

“I look forward to the debate across the party and island,” O’Dowd wrote.

But there has been no debate – or at least certainly no public debate – and precious little sign of an internal one involving the two contenders.

The hundreds of Sinn Féin delegates from all over Ireland who will vote at this weekend’s ardfheis in Derry may not be aware of the policies and issues where O’Neill and O’Dowd may differ, if indeed they do disagree, because of the absence of that discourse. But unless they are absolute political neophytes they will know the party hierarchy is firmly for O’Neill.

McDonald justified the lack of hustings, saying the leadership took a view on how the contest would be handled 'bearing in mind it’s an internal position'

The headline, which demonstrated that Sinn Féin still is different from most other political parties, related to an interview with party president Mary Lou McDonald, where she fully supported O’Dowd’s “prerogative” to run.

McDonald justified the lack of hustings, saying the leadership took a view on how the contest would be handled “bearing in mind it’s an internal position”.

O’Neill, for her part, told The Irish Times she had said from “day one” that O’Dowd was “entitled to put his name forward, that I welcomed the contest, and that I’ll go to the party and stand on my own track record”.

Despite the lack of evidence, she claimed that both she and O’Dowd had taken their message and their plans to the Sinn Féin membership, speaking personally with many delegates.

However, The Irish Times was unable to ask O’Dowd for his interpretation. Despite requests to the Sinn Féin press office over several days, no response came by the time of going to print.

McDonald argued the same point as O’Neill, saying both had talked to “people right across the country”, yet that engagement, such as it was, must have been behind hermetically-sealed doors considering there is such little public – and perhaps even grassroots Sinn Féin – knowledge about what is at play in this contest.

And there are important matters to address. Sinn Féin needs some rebooting, especially south of the Border. Though it remains strong in the North it performed very poorly in the presidential election, taking just 6.4 per cent of the vote, lost two of its three MEPs, and saw its local council representation drop by half.

In the North, moreover, there is the restoration of Stormont. Yet no one knows if O’Neill and O’Dowd differ on what should be done about powersharing, or about Sinn Féin’s quest for a Border poll on a united Ireland.

There is also the big issue of how the McDonald-O’Neill leadership is performing compared to Adams-McGuinness. There is plenty to ventilate, if the doors were opened.

O’Dowd, who stood in for Martin McGuinness as deputy first minister when he ran for the Irish presidency, has displayed considerable chutzpah by putting himself forward.

After all, McGuinness, shortly before his death, with the full support of Gerry Adams, personally bequeathed the effective deputy position to Michelle O’Neill in January 2017.

Francie Molloy, MP for Mid Ulster, which is also O’Neill’s constituency, said it was the wrong time for a deputy leadership challenge, since O’Neill had not had a real chance to deliver as the Northern Assembly was down.

You know what Sinn Féin is like, our discussions are internal ones

Two-and-a-half months on, however, because of the lack of debate people are none the wiser about any differences between the candidates or the plans they may have to restore Sinn Féin fortunes.

This week, Molloy preferred not to say much, though he pointed out that he had once unsuccessfully challenged former vice-president Pat Doherty for that position so “that people could have a choice”.

Neither candidates had pitched to cumainn, he said, though party members have spoken about it with each other: “Delegates will be instructed from their cumainn or comhairle ceantair [district council] on the way to vote,” he said.

At the time, the Sinn Féin MP for Fermanagh South Tyrone Michelle Gildernew said she was backing O’Dowd. When contacted this week she felt it was “probably best not to say a big pile” about the contest.

Pressed ,she said, “There is no big conspiracy theory”. But she allowed, “You know what Sinn Féin is like, our discussions are internal ones.” So, no change there.

“This a conversation to have with our grassroots, that’s the people that need to be talking about it; it is not really for public consumption; it’s something that we will discuss internally, and I don’t have any issue with that,” she said.

Still, it is interesting that such a high-profile Sinn Féiner as Gildernew has decided it is time for O’Neill to be replaced.

It might also seem curious that McDonald would be asked by the Irish News whether O’Dowd’s candidature would hinder his future in Sinn Féin.

McDonald said that “absolutely and categorically” O’Dowd’s decision would not damage his standing. But the fact the question was asked at all illustrates how Sinn Féin is still viewed as not fully adhering to democratic norms.

It all evoked how Peadar Tóibín felt forced to resign from the party because of his position on abortion. Tóibín was gradually ostracised within Sinn Féin. Some wonder if O’Dowd will suffer the same fate.

Tóibin, who now leads Aontú, believes it is long past time for Sinn Féin to end its “iron, internal discipline” of democratic centralism. Such a regime worked in the past, but now threatens the party’s development, he argues.

“They need to trust the membership to have a say over what happens with the future of the party, and they are not doing that at the moment,” he added.

On O’Dowd’s challenge Tóibín said, “It is shocking that John was not given a platform either publicly or privately to present his vision of Sinn Féin to the membership in advance of cumainn voting.”

Ordinary members have “little or no say”, many feel disempowered. “This was seen in the fall in votes in the presidential, European and local elections. There is no democratic vent to release frustrations.

“Sinn Féin have the internal infrastructure of democracy but it’s not functioning as it should. There are good people in Sinn Féin but very few that will make a stand. To date the only option many have had has been to walk away,” Tóibín said.

However, Foyle MP, Elisha McCallion, is among those in the party who believes this will not happen.

“Michelle is my friend, but so is John. That’s the thing about Sinn Féin, we are a family, we are a unit,” she noted.

Like much in politics, this remains to be seen. However, what does appear certain is tonight’s result.