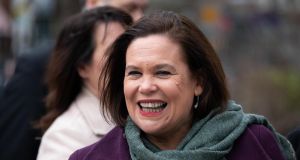 Another Sinn Féin councillor has resigned from the party but has cited personal and “mundane” reasons rather than any dispute with the leadership.

Úna D’Arcy, a Westmeath councillor, confirmed that she had relinquished her membership of Sinn Féin and would contest the next election as an Independent.

However, Ms D’Arcy, who is based in Mullingar, said on Tuesday she had no major dispute or grievance with the party. Rather, she had concluded her deep involvement with community issues and projects more suited an Independent status, rather than affiliation with any party.

“The reasons are very mundane and very practical,” she said. “My work here is community-led intervention where I identify their challenges and their needs.”

She also said she had a close working relationship with Peadar Tóibín, the Meath West TD, who left Sinn Féin along with Carol Nolan last year, in a dispute over the abortion issue. Part of the area Ms D’Arcy represents in Westmeath is in the Meath West constituency.

“People feel very marginalised, and feel left behind and stigmatised for having pro-life views.”

Asked if she had any difficulty with the leadership of Sinn Féin president Mary Lou McDonald, Ms D’Arcy said not at all. “I love Mary Lou to bits and have no issues. We got on well,” she said.

Earlier, Ms D’Arcy told Midlands 103 she wanted to leave the party before they began putting her face on election posters.

While she does not have plans to join Mr Tóibín’s fledgling party, several councillors have resigned from other parties to join his movement. They include Co Tyrone councillor, Rosemarie Shields, formerly of the SDLP and Cllr Sarah O’Reilly from Cavan who left Fianna Fáil.

Over a period of two years until the summer of 2018, Sinn Féin saw a total of 37 representatives vacate their seats or resign from the party.

Ten left for personal reasons, five were expelled, eight resigned and an additional 14 quit alleging bullying with the organisation.