Miriam Lord: High-priced hospital? This is a job for The Consultants

The cost of the children’s hospital has tripled but Leo’s not worried: PwC is on the case 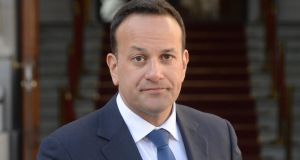 Leo pulled a stubby pencil from behind his ear and licked it: “Some of the figures being bandied around don’t include VAT.” Photograph: Dara Mac Dónaill

Great news for hard-pressed citizens in the best small country in the world in which to blow budgets.

The cost of the new National Children’s Hospital may be going through the roof, but deliverance is at hand.

The Government has called in The Consultants.

There is nothing they don’t know about through-the-roof charges.

They are going to do up one of their reports.

The Taoiseach delivered the glad tidings to the Dáil on Tuesday after the Fianna Fáil leader asked about the ever-expanding cost of constructing the new hospital. “Extraordinary stuff” marvelled Micheál Martin, trying to understand why an initial figure of €650 million quoted two years ago has now ballooned to an incredible €1.7 billion, with no sign of stopping there.

Despite the running total almost tripling in two years, Micheál pointed out that not one extra bed will be provided as a result of the hugely increased spend. On the other hand, Ireland is now in pole position to win bragging rights as the country with the most expensive hospital in the world.

We’re winning a top-of-the-table tussle with Stockholm for this dubious honour. The Swedish hospital, said Micheál, “became a famous outlier – they built it at a cost of €2.1 billion, way over cost. But at least it provided 1,340 beds. At €1.7 billion, at the moment, our hospital will provide 473 beds.”

You want the best? You got to pay the best and this hospital is going to be the very best of its kind in the world, was the gist of his explanation.

Quality costs. Such is life, particularly when it comes to building major capital projects in Ireland.

“I think when we talk about the children’s hospital, we shouldn’t forget about the enormous value that this project will bring to the country,” he declared, before going on to outline, in great detail, all the marvellous, state-of-the-art facilities that will be available in the hospital once it’s open.

“It will, in itself, be born digital,” enthused Leo, which is hardly surprising for a new, 21st-century facility. “This will be an enormous asset for the country and one that will serve our children well not for decades but for longer, perhaps for more than 100 years.”

This Dáil centenary thing is going to his head, we thought, as we looked at Independents4change TD Clare Daly, who was sitting in the chamber wearing a long-sleeved T-shirt emblazoned with the slogan “Free Assange” beside the face of the WikiLeaks founder.

But back to Micheál Martin, who, along with Catherine Murphy of the Social Democrats, has been drawing attention to the spiralling costs for some time now, and wants a full inquiry into the project.

The Taoiseach did his best to explain why the early estimate went up by such a huge amount. Narrowing his eyes while noisily sucking the air through his teeth, he pulled a stubby pencil from behind his ear, licked it and did a quick tot on the rumpled bookie’s docket he found in his pocket.

“Ye see, it’s like this missus. This was not your normal job. We had trouble with The Multifactorials.”

“Why did it go up?” Leo asked aloud, as the chamber listened. “For reasons which have been explained: construction inflation; fire-safety rules, which required a much more expensive sprinkler system – very much more expensive; a miscalculation around the cost of electrics and cabling (the board got that wrong); and also, obviously, any time the cost goes up, the VAT goes up as well, so we shouldn’t forget that some of the figures being bandied around don’t include VAT.”

Opposition TDs guffawed. He was only short of adding in diesel for the van, which he forgot to factor into the price.

This isn’t any old overrun, the sort of contingencies that emerge at the end of most building projects to shock people.

He reminded Leo of what he said when the original estimate was announced. “It was you who said in 2016: €650 million.” Micheál remembers it well.

He was on his feet, looking most perturbed, like a householder standing in the doorway of his new bathroom – suite (fully fitted), paint, tiles and electrics – brandishing the plumber’s bill in a trembling hand.

“ALL IN, you said!” he quivered. “VAT, inflation, contingency. That’s what you said two years ago. And you’re now telling me, that as Taoiseach, you were told only at the end of November that this was up to €1.7 billion.”

No VAT, no guarantee

To add insult to injury, the Taoiseach didn’t tell the Dáil about this until the full memo about it was leaked during the Christmas holidays.

“A sprinkler system doesn’t explain a near trebling of the cost.”

“VAT doesn’t explain a near trebling of the cost,” added Micheál, sighing that everyone knows there won’t be much change out of €2 billion by the time the job is done. He demanded an inquiry.

The Taoiseach couldn’t really help with the sums. There is “no one single thing” that can explain an overrun of this magnitude.

Anyway, Micheál shouldn’t worry about investigating the soaring hospital bill. Leo told him that the Department of Health is continuing to operate in the same manner it operated all those years ago when he was a Fianna Fáil minister for health. It is commissioning a report.

“The review that is being undertaken by PwC commenced this week,” he informed a none-too-impressed Dáil. The department has “engaged” with the HSE and the accountants/consultants in relation to finalising “the terms of reference and the methodology and the time frame for this review”.

The Taoiseach said he is looking forward to reading it when it comes out.

Still, as the Sinn Féin leader reminded us next, we still have our working children’s hospitals here. Like Temple Street.

Mary Lou McDonald reminded the Taoiseach, before he sets off for the annual billionaires’ bunfight in Davos, that almost 850 children treated in a Dublin hospital’s emergency department last year were discharged to homelessness. They left to return to “no fixed address”.

Perhaps Leo can start a discussion about that when he’s in the Swiss Alps.