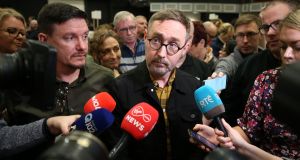 Sinn Féin TD Eoin Ó Broin: “It did not matter if it was a council estate or a settled residential area. Housing was, if not the major issue, one of the top two major issues in the campaign.” Photograph: Nick Bradshaw

Housing was one of the biggest issues on doorsteps around the country and was a major contributor to Sinn Féin’s success in the general election.

The fact that so many younger voters opted for Sinn Féin indicates that they did not have faith in the housing policies put forward by either Fine Gael or Fianna Fáil.

While Fine Gael said it would continue with its rent pressure zones, which have been criticised by opponents as ineffective, Fianna Fáil’s flip-flop on the legality of a rent freeze may have also been a factor.

Speaking after his re-election in Dublin Mid-West, Sinn Féin’s Eoin Ó Broin said housing was “one of the key issues in the campaign everywhere that we went”.

“It did not matter if it was a council estate or a settled residential area. Everybody was talking about it. Housing was, if not the major issue, one of the top two major issues in the campaign.”

After the party’s poor showing in the local and European elections in 2019, a decision was taken to roll out more positive messages detailing how Sinn Féin would respond to the housing crisis and address problems in the health service.

Sinn Féin decided younger voters were motivated more by policy issues rather than party politics, and that housing was one of these issues that motivated them most.

And, according to the Ipsos MRBI exit poll for The Irish Times, RTÉ, TG4 and UCD published on Saturday, voters rated housing and health as by far the most important issues in deciding how they voted in the election.

That exit poll showed 38 per cent of Sinn Féin voters said housing was the most important factor in how they decided to vote. This compared to just 13 per cent of Fine Gael voters and 23 per cent of Fianna Fáil voters.

Broken down by age, 33 per cent of voters under the age of 24 said housing was the most important factor, and 38 per cent of those under 34 said the same.

Mr Ó Broin, his party’s housing spokesman, said: “You can see right from the 18-35 age group we were doing exceptionally well and I think that shows clearly that there is an entire generation of younger people for whom housing was their number-one concern.

“They were saying the State had failed to bring in the right policies and implement them in the right way. In an economy as robust as this, people on good incomes can’t afford to rent so what hope do people on lower incomes have?”

He said the issue of homelessness also struck a chord with voters and that housing reform would have to be a key part of any new programme for government.

“On the issue of homelessness, people were connecting their own housing need with those at the most acute end, so those without a roof over their head. People were saying, yes, our family is affected but look at the children in emergency accommodation and look how long those children are there. How is that possible in a country like this?”

Just before her re-election in the Dublin Central constituency, Sinn Féin leader Mary Lou McDonald at the RDS said her party’s offering on housing had been central to its electoral success.

When asked what the next government might look like, Ms McDonald said she would “not do another five years of the housing crisis”.

She said: “This election was all about change. Sinn Féin went to the people and we convinced them in large numbers that we are the alternative, we are the vehicle for change. We asked people to give us a chance to deliver the platform we have set out.

“That platform is about solving the housing crisis, it is about getting to grips with the crisis in our health services. It is about giving families and workers a break so that ordinary people begin to experience this economic recovery that we have heard so much about.”